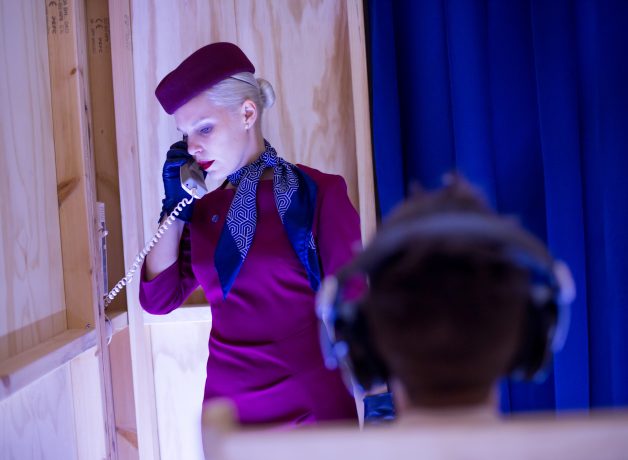 Extraordinary Rendition is a 15-minute performance installation for one person at a time that uses video, sound and live performance to interrogate the kind of colonisation that begins with the battle for hearts and minds.

In a cabin built from the same materials as Camp X-Ray, the temporary detention facility at Guantanamo Bay in Cuba, and with the same internal dimensions of a detainee’s cell, Extraordinary Rendition is a bold and important work asks difficult questions about our complicity in conflict and abuses of power carried out in our name.

How does culture become a weapon of warfare? How is a Britney Spears song connected to a global network of secret prisons? What is the relationship between entertainment and the military?

Fresh from performances in Edinburgh, Brussels and Peru, Slap Talk is a durational performance where two performers rant, threaten and insult each other non-stop for six straight hours. Audience members are encouraged to stay for as long as they can, but are welcome to take breaks whenever they like.

Reading from an autocue, their faces viewed in extreme close-up on two monitors, the performers’ words are violent and confrontational, but playful; they speak as if they’re boxers at a pre-fight weigh-in. For six continuous hours, they put their money where their mouths are and their bodies on the line. No breaks, no time-outs, no punches pulled.

Action Hero have been making work for over 10 years, work that is in turns distinctive, invigorating and unusual by placing the work in theatres, galleries, public spaces and clubs.

Their work also includes audiences as collaborators and co-conspirators, making the live performance a real event for everyone involved.

Catch a movie at Home this Aug/Sept