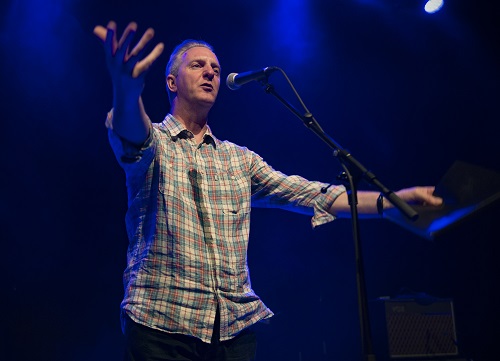 A POET whose words helped bring the people of Greater Manchester together following last year’s Arena bomb attack is being honoured by the University of Salford.

Tony Walsh is receiving an honorary Doctor of Letters degree during a ceremony at The Lowry on July 19 in recognition of his services to the art form.

Tony, also known as Longfella because of his towering stature, was elected as a Fellow of the Royal Society of Arts in 2016, has performed at music and literary events around Europe and leads poetry workshops in schools internationally as well as in prisons, homeless shelters and care units.

He is best known for his poem This Is The Place, celebrating the spirit of Greater Manchester, which he performed to crowds at Albert Square the day after the Manchester Arena bomb attack.

The performance was featured on news stories around the world, coming to symbolise the city’s resilience in the face of the attack.

He later ‘gifted’ the poem to the people of Greater Manchester, ensuring any royalties would go to the Forever Manchester charity which funds community projects. Proceeds from the sale of items featuring lines from the poem have so far raised £200,000 for the charity along with the We Love MCR Emergency Fund and The Greater Manchester Mayor’s Homelessness Fund.

He also performed at the One Love benefit concert organised by Ariana Grande two weeks after the bomb attack, as well as at the reopening of Manchester Arena

A BBC film of Tony reading his poem Up ‘Ere from the top of Blackpool Tower attracted more than three million views on Facebook, and it has been interpreted as a garden at this year’s Tatton Flower Show.

Tony has also recently written a poem celebrating the 80th anniversary of Manchester Airport, while a new work will be launched at the Imperial War Museum North on July 26.

Tony’s work has been broadcast internationally on radio and television, published in numerous anthologies and his second full collection of poetry will be published in September.

But although he had been writing poetry privately since the age of five, Tony did not perform his work in public until the age of 39, during an event at Manchester’s Briton’s Protection pub in 2003.

He studied Business And Administration at the University of Salford in the 1980s, but dropped out and went on to work in a variety of jobs, including as a housing manager for Manchester City Council and leading community regeneration projects for Salford City Council. He eventually becoming a full-time poet in 2011 when he was Poet In Residence at the world renowned Glastonbury Festival.

Tony has since returned to the University to give lectures to students on the Comedy Writing And Performance programme, perform at the opening of the MediaCityUK campus, and watch Media and Performance students interpret his poems.

He said: “I have a 35 year history of, at different times, studying, working, living, teaching, broadcasting and performing in Salford and so to be honoured in this way means a very great deal to me.

“I dedicate this award to the many amazing people in the great City of Salford and the wider city region of Greater Manchester whose amazing spirit continues to prove that this is indeed THE Place! Huge thanks to all who have blessed me with their support.”

Beth Hewitt, Director of Broadcast Media at the University of Salford, said: “Tony is a wonderful creative and has been an inspirational figure to so many people, nationally and globally. He has shown the world that it is never too late for people to pursue their passions, and that poetry still has the power to move and bring people together.”

Almost half of shoppers in the North West put off buying ethical products due...