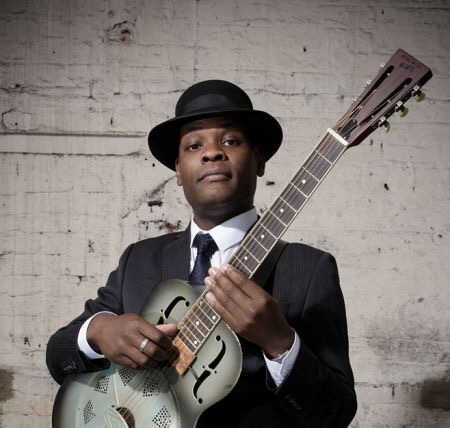 A University of Salford academic had his very own Jimi Hendrix experience – scoring a series of songs in the legendary guitarist’s memory.

Associate music lecturer Tom Attah was invited to write six songs, twenty minutes of music altogether, for the Hendrix Museum, in Mayfair, but stopped short of burning his guitar!

Working with his musical partner Ari Rannus, Tom has composed and performed music which forms part of the relaunched historic site, Handel & Hendrix in London, dedicated to musical neighbours George Frideric Handel and Jimi Hendrix, separated by a wall and 200 years.

As visitors tour the space Tom’s original acoustic music performance provides an important backdrop and atmosphere for the legendary musician’s ‘first real home’ of his own, 23 Brook Street, in Mayfair London.

Tom, who teaches on the pop music course at The University of Salford, as well as being a professional musician, said: “It was a real honour to be asked to do this but it was very daunting as well. I have been a fan of Hendrix since I got my first guitar, his music was so groundbreaking. It is amazing to hear my music associated with him.

“I wanted to create something that was in the style of Hendrix, but my own take on it.”

It is said that Hendrix was at a pivotal point in his career when he moved into the Mayfair flat in July 1968. He was months away from the release of his Electric Ladyland LP, His only album release to make it to number one in the charts, as well as the disastrous Royal Albert Hall performances of February 1969.

At the heart of the museum is the main living room, painstakingly restored to how it would have been when Hendrix was in residence, and offering an insight into the domestic life of an American superstar musician at the height of his creative powers.

The main room of the flat has been designed to give the impression that Jimi and Kathy Etchingham, his girlfriend at the time, have just stepped out. Surviving stills and film of the room, along with the recollections of Kathy and visitors to the flat were al used to create as real a recreation as possible.

Tom said: “We explored all avenues and possibilities. The challenge was to replicate the sound of Jimi on an acoustic guitar. The phrasing, note choice, and vibrato of any individual guitar player is like a fingerprint and is very difficult to copy directly.”

All of the songs are played on an acoustic guitar and re-create different modes of Jimi’s playing: rock, pop, ballads and underpinning all, the blues.

Tom added: “We hope that our music adds to the ambience of this wonderful exhibition and allows the many future visitors to 23 Brook Street to step into Jimi’s private world for a few moments.

“I have thoroughly enjoyed creating an active part of the soundscape and I’m thrilled to be connected with this project. Of course, no one will ever be able to play exactly like Jimi—but I’m deeply honoured to have paid tribute to a musician whose immense contribution to music and culture remains incalculable.”