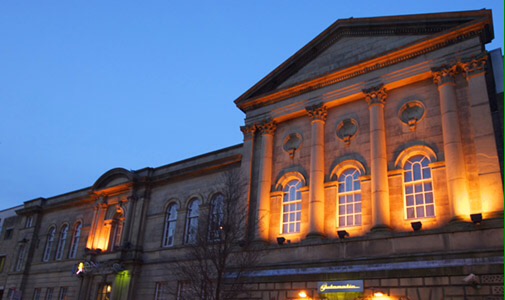 The Met has announced an exciting season of live music, comedy and theatre in new and unexpected places around Bury this spring.

Gallipoli Gardens, the Fusiliers Museum, Bury Art Museum and Ramsbottom Civic Hall are just some of the locations that will be hosting theatre performances, children’s theatre, workshops, live folk concerts and comedy nights whilst the Met’s home at the Derby Hall on Market Street undergoes its £4.6million refurbishment.

The Met’s artistic director, David Agnew has welcomed the challenge that the building’s temporary closure has to offer, to put together a diverse and engaging programme that can step outside of The Met’s four walls and reach new audiences.

Highlights include ‘Chip Shop Chips’, a site specific show set in a chip shop complete with fish supper served at the interval; singer songwriter, James Grant at Fusilier Museum; Hot Club of Cowtown – western swing from Austin, Texas at Bury’s Elizabethan Suite; a family puppet show performance of Arnold’s Big Adventure in a big top tent in Gallipoli Gardens; performance from folk award winning due, Josienne Clarke and Ben Walker; three Martin Crimp plays performed by Proper Job Theatre at Bury Art Museum – for which audiences get to pay want they want for tickets after the performance; the Big Whistle festival and much more.

The refurbishment which commences in March 2016 will restore the building’s heritage features, as well as transforming the interior to increase capacity and improve facilities for everyone who uses the venue.