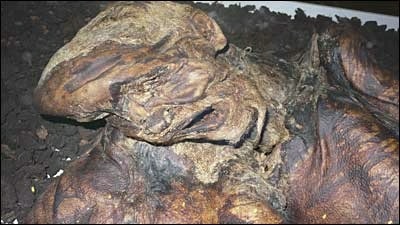 On 1 August 1984, a peat cutter on Lindow Moss found a long thin object on a conveyor belt. Assuming it was a piece of wood, he threw it to the floor. But when the object hit the ground, the peat fell away, revealing the well preserved remains of a human leg.

This turned out to be the remains of Lindow Man, the best preserved bog body to be found in Britain.

Professor Anthony Jones from the University of Manchester says that he was believed to be about 22 years old when he was violently killed in the 1st century AD and his body placed face downwards in a pool in the Moss.

He is the most convincing evidence for human sacrifice in Iron Age Britain.Before he was killed he had eaten unleaven bread made from wheat and barley, and had drunk a drink. He was taken to the bog. First, a couple of blows from a heavy object to his head smashed his skull.

His throat was then cut and he was allowed to bleed for a time. Finally, he was placed face down in a pond in the bog. This horrific and elaborate sequence strongly suggests that he was sacrificed as part of a ritual. The drink contained mistletoe, which was sacred to the Druids, and it is recorded that Druids carried out human sacrifices.

The conditions in the peat bog meant that the man’s skin, hair and many of his internal organs are well preserved.

Gettin High -Paolo Hewitt on his time with Oasis