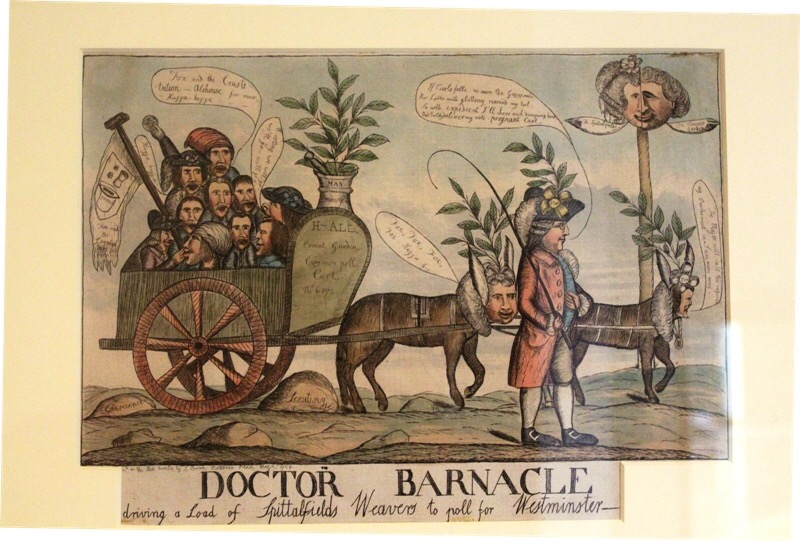 Thanks to money from the Heritage Lottery Fund’s Collecting Cultures programme the Library is now the owner of a rare and most unusual archive of election material from 1835.

The material details the expenses of a Lincolnshire Tory candidate, Thomas George Corbett, including amounts spent on alcohol, tobacco and wagons to get his voters to the hustings.

The arrival of the archive just before the General Election is opportune enough.  But volunteer Jen Morgan, who has been researching the background to Corbett’s campaign while putting together the exhibition, has unearthed an even more curious coincidence.  Thomas Corbett turns out to be the great-great-great-grandad of none other than Samantha Cameron.

Corbett arrived on the scene less than two weeks before he was presented to the electorate, a Conservative candidate for one of the two MP posts that were up for grabs in a constituency represented by a Whig and by the radical reformer Ingilby, who had been an MP in the area for the previous 15 years.

To displace one of these men in such a short period, Corbett had a difficult task ahead. Breakfasts and grog had to be bought for potential voters, and wagons must be secured to transport them to the polling stations.  Musicians, flag bearers, and ‘protection’ must be hired. There was a barrel of tar to burn, and ribbon to buy. Yards and yards of pink ribbon to festoon the place with the Tory candidate’s colours.

Drop in any time Wednesday to Friday afternoons to see this rare and unusual archive of materials documenting Corbett’s expenses in winning his seat. They open a window onto the ways in which campaigns were run in the 1830s, and what it took for a Tory candidate to win when the ‘whole of the Radical party was arrayed against him’…

Pinochet’s ‘soundtrack to torture’ made available to the public