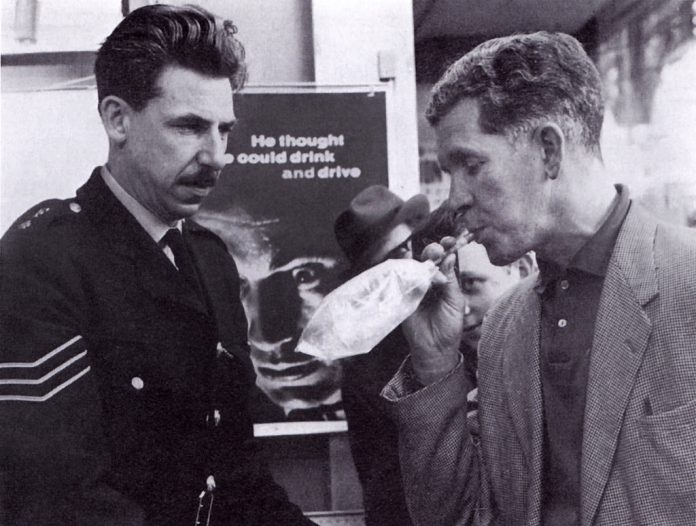 The drink drive breathalyser is 50 years old this weekend.

Police carried out the first roadside breath test on a motorist in Shropshire on 8 October 1967.

Prior to that, the criteria for prosecution were somewhat less scientific – whether you could touch your nose with your eyes shut, walk in a straight line or stand on one leg.

Back in 1967 there were 1,640 road fatalities attributed to alcohol. Since then, there’s been an eight-fold reduction in the number of deaths alongside a dramatic increase in car ownership.

But 200 people a year still die in accidents where at least one driver is over the alcohol limit, according to the latest statistics from the Department for Transport (DfT)*.

Police carried out over half a million (520,219) roadside breath tests in 2015, the lowest number since data collection began in 2002. More than 60,000 drivers (one in eight of those tested) failed or refused to take the test

Men were twice as likely as women to fail a breath test, a trend that was consistent across all age groups according to the DfT report.

The Road Safety Act of 1967 set the maximum limit at 80mg of alcohol per 100mL of blood (0.35mg of alcohol per litre of breath). It became an offence for the first time to be in charge of a motor vehicle with a blood or breath alcohol concentration exceeding that limit.

“It seems remarkable now that the new law was greeted with outrage in some quarters, with publicans heckling the then Transport Minister, Barbara Castle, accusing her of damaging their trade,” comments Hunter Abbott, Advisor to the Parliamentary Advisory Council for Transport Safety (PACTS) and Managing Director of breathalyser firm AlcoSense Laboratories.

“In the first 12 months alone, there were 1000 fewer deaths and 11,000 fewer serious injuries on the roads – proving that the use of the ‘drunkometer’ was both necessary and justified”.

The original ‘blow in the bag’ breathalyser was a relatively crude device, initially used to confirm a policeman’s suspicion that a motorist was under the influence. A subsequent blood or urine test at the police station provided the evidential proof.

The fuel cell alcohol sensor was later developed, an electronic device that transformed the process of screening by providing the police with a quick test to accurately quantify the driver’s alcohol level at the kerbside. For prosecution a second evidential test needed to take place at the station using a second, more precise method than used at the scene.

Until the Nineties this involved blood or urine testing at the station which required a doctor to be called out to take the sample. If a doctor was unavailable, sometimes a driver could escape prosecution. The process was dramatically simplified with the invention of evidential infra-red breath testing at the station, offering comparable accuracy to blood testing – removing the need for a doctor to be called out and improving the prosecution rate.

“There are still more than 5,000 accidents a year where at least one driver is over the alcohol limit, and nearly a fifth of drink drive convictions are the morning after the night before,” adds Hunter Abbott.

Studies also show that if you drive while having only one-eighth of the English drink drive limit in your system (one fifth of the Scottish limit), you are 37% more likely to be involved in a fatal accident than when sober.

“This is a remarkable milestone, and I am proud of the work this department has done to reduce the number of deaths from drink driving over the last 50 years.

The change in attitudes to drink driving during this time has been profound, and there is little doubt that the introduction of the drink-drive limit helped to give us what remains one of the safest road networks in the world.”

Dog and puppies stolen from Devon set to be reunited with owner thanks to...