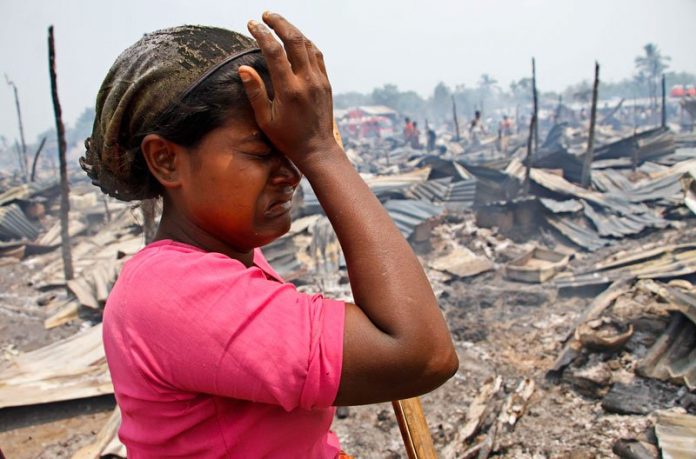 Zaheer Khan, an aid worker for Greater Manchester based NGO Human Appeal, has described how over the past 16 months Cox’s Bazaar in Bangladesh, where approximately 400,000 Rohingya have fled to since the escalation of violence in Myanmar, has been left “unrecognisable” due to the extreme poverty the crisis has brought to the area.

He has also shared some of the shocking stories those escaping the conflict shared with him.

Mr Khan, who works for Human Appeal who have their headquarters in Cheadle Greater Manchester, described what he saw last week on his latest trip to the area:

“When I arrived in Cox’s Bazaar, in Bangladesh I saw extreme poverty. Having visited the very same area just last year it is now completely unrecognisable. When I visited in 2016, there was a small number of Rohingya who had already settled there, but on my latest my trip my eyes were torn open to the severe realities on the ground caused by the conflict across the border in Myanmar.

“Aid agencies like Human Appeal are now facing an extremely difficult task to help meet the needs of the 400,000 Rohingya who have fled from Myanmar. The images of women, the elderly and babies living in squalor broke my heart and will be etched into my mind forever.”

Mr Khan spoke of some of the stories he heard from the Rohingya on his recent trip to Myanmar and Bangladesh:

“Many of the people I spoke to told me how they had to flee the violence by gathering the little belongings that they had and just headed for the border. Some of the women and children recounted the horrific stories of their journey. One particular woman in Bangladesh, who was heavily pregnant was waiting at one of Human Appeal’s food distributions. When I spoke to her nothing could prepare me for what she said. ‘Where is your husband?’ I asked. ‘He is dead.’ She responded ‘He was murdered last month, his neck was slashed in front of me and then he was hung in the local market for everyone to witness.’

“I also spoke to a 10-year old boy in Myanmar who told me how his mother and father and all his older siblings had been murdered and he is now left caring for his younger brother. No one, never mind a 10-year-old, should have to experience this.”

Mr Khan also highlighted that a developing country like Bangladesh, who are thought to have taken virtually all of the refugees from Myanmar’s Rakhine State, are struggling to cope with the extreme levels of poverty and their demands the situation has imposed upon the,:

“I have seen quite a few conflicts in my long career as an aid worker, where communities have been forced to flee to neighbouring countries for refuge but what makes the plight of the Rohingya different is that they have entered Bangladesh, a country which itself is struggling, where millions are already living below the poverty line. From what I witnessed Bangladesh is totally ill-equipped to support the refugees.”

On his latest trip to Bangaldesh and Myanmar, Zaheer was part of a Human Appeal team who were providing emergency food for over 1,000 Rohingya families in Myanmar and over 450 families in Bangladesh, as well as organising countless more Human Appeal aid distributions for the foreseeable future.

Whilst Human Appeal are able to deliver aid to those who needed it most in Bangladesh, Mr Khan described at how challenging it is for charities like Human Appeal to distribute emergency aid to the most desperate people on the Myanmar side of the border.

“After I left Bangladesh I travelled to Rakhine State in Myanmar, unlike in Bangladesh, I was extremely restricted from getting to those most affected by the violence in Myanmar. However, I was able to help those near to the worst affected regions who still had very high levels of need and were facing repercussions of the conflict. Most of the villagers that I spoke say they live in constant fear that the violence will spread to them. They have been given clear instructions by the local government that they are not allowed to leave their camps and villages.”

Outside of international work, Human Appeal also fight to help those in need here in the UK. Human Appeal received widespread coverage for their Muslims for Manchester campaign in May, which saw them raise over £28,000 for the victims of the Manchester Arena attack. Human Appeal raised over £170,000 for UK people in need, such as rough sleepers or victims of the Grenfell Tower fire, during the Islamic holy month of Ramadan alone, this year. They also collected over 1,000 coats for rough sleepers in Manchester for their “Wrap Up Manchester” project and plan to do the same this winter in Manchester, Birmingham and Glasgow.

More information about how to donate to Human Appeal’s aid efforts for the Rohingya can be found at donate.humanappeal.org.uk