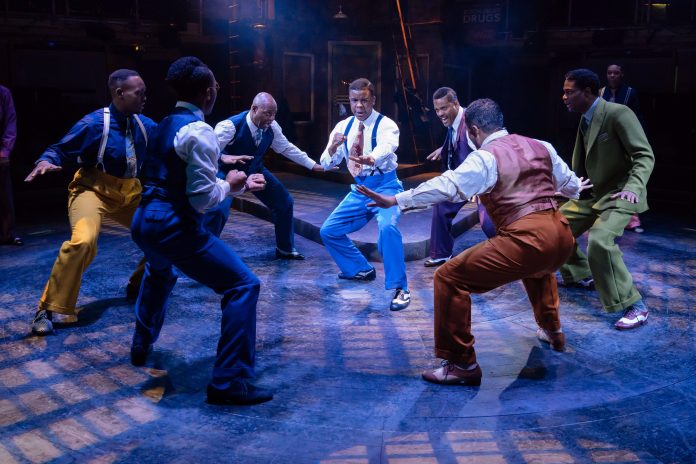 Michael Buffong transports the smash-hit musical GUYS AND DOLLS up-town to 1939 Harlem in the UK’s first all-Black cast production of this iconic show celebrating the off-beat stories of Damon Runyon.

You know when you watch a musical you’ve seen many times in a film as a child and are disappointed when you see a live performance …..? Well this certainly wasn’t one of those occasions!

I can honestly say I spent most of the performance smiling and tapping my feet as an incredibly talented cast raised the roof of the Royal Exchange and delightfully re-enacted all the best tunes from Guys and Dolls.

It would be wrong not to give special mentions to Lucy Vandi and her powerful honeyed tones as she portrayed Miss Adelaide in both a humorous and heart-tugging performance and Sky Masterson who has never seemed so endearing as when being played by Ashley Zhangazha. There was not a dry eye in the house for Trevor A Toussaint and his understated but beautifully sincere rendition of ‘More I cannot wish you’.

The choreography was energetic and perfectly executed by the accomplished cast and even the set changes were a joy to watch as they were so smoothly carried out.

The show stopper for me; apart from Miss Adelaide’s laments, was ‘Sit down you’re rocking the boat’, Nicely-Nicely delivered by Ako Mitchell with an absolute cracker of a tight routine by all and worth going to see the performance for this scene alone.

So follow the fold and go to see this fabulous feel good night out in Harlem …. or call a lawyer and sue me because I loved this production.