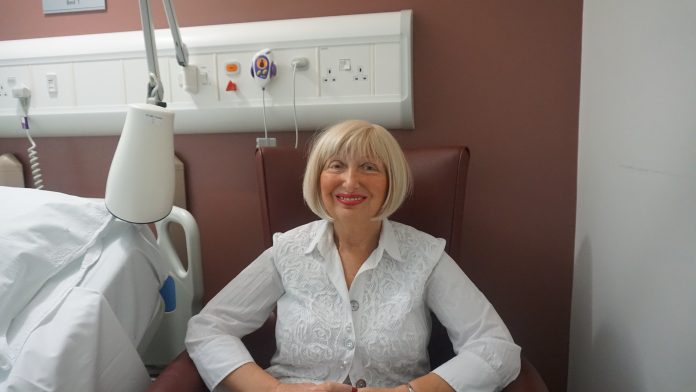 A breast cancer patient from Rochdale, who has already tried nine different treatments, has become the first in the world to be given an exciting new combination of cancer busting drugs.

Retired office manager Anna Jones (65), who previously worked for the NHS Breast Screening Quality Assurance Reference Centre, has been doggedly fighting secondary breast cancer since being given the devastating news in 2004 that her cancer was treatable but not curable.

Anna, who has HER2 positive breast cancer, is now pinning her hopes on one of the latest immunotherapy drugs known as R06874281 developed by Roche. In the study Anna is taking the new immunotherapy drug in combination with trastuzumab (brand name Herceptin).

Taken in combination with trastuzumab, which binds on to the HER2 protein on cancer cells and interacts with the immune system through its human anti-body portion, researchers believe that the RO6874281 will make trastuzumab more visible to the immune system and help to kill the cancer. It is hoped that overall patients will experience reduced side effects compared with traditional interleukin 2 treatment.

Professor Andrew Wardley is the principal investigator for the trial, which is supported by the NIHR Manchester Clinical Research Facility at The Christie. He said: “This is an exciting and very novel form of therapy especially for breast cancer and I’m delighted that our patient Anna will be the first to hopefully benefit from this treatment. We believe that the two drugs working together will be more effective at targeting the cancer and stimulating the body’s immune system to kill the cancer cells.”

Anna is no stranger to clinical trials at The Christie, having already participated previously She was inspired to take part in trials after watching the film Living Proof, staring Harry Connick Jr as Dr Dennis Slamon, battling to get Herceptin accepted as a game changing treatment for breast cancer.

Anna had read about immunotherapy treatments being an exciting area of cancer research so when her consultant Dr Loncaster mentioned the trial for a new immunotherapy drug combination she jumped at the chance.

“I was given all the information I needed to make an informed choice”, said Anna. “And although I’m full of hope that the new drugs will work it is also wonderful to know that other people will potentially benefit in the future from this research. It would be a good legacy to leave.

“I feel very privileged to know that I’m the first person in the world to have been given this new combination of anti-cancer drugs. It’s a bit scary but also very exciting. In the first week I’ve had some ups and downs feeling lethargic and woolly headed at times, but I know that’s just the drugs getting to work on the cancer.”

“When I was first diagnosed 13 years ago I wanted to be treated at The Christie, even though other hospitals were closer, because I knew it was a centre of excellence for cancer. Since then the care I’ve been given has been outstanding and I know that being at The Christie means that I’ll have access to all the latest innovations and treatments.

“The staff at The Christie have always accommodated my needs and I’ve benefitted from having radiotherapy at The Christie at Oldham and having some previous treatments on the mobile chemotherapy service at Tesco in Rochdale and nurses even coming to my own home as part of the Christie at Home service. I’ve also made use of the cancer information centre at The Christie, the wig service, support through Look Good Feel Better, and the complementary therapy team for massages.”

“I’ve been coming regularly to The Christie for 13 years and have made friends with other patients and the staff. When people find out that I’ve been battling my cancer for over a decade I can see that it gives them hope.”

Anna and husband David (66) are keen travellers, having visited Kenya, Barbados, Gambia and Hawaii. Whenever she receives positive news about her condition she books a holiday with David and they are now regular visitors to the Costa del Sol and Canary Islands. She also enjoys regularly catching up with family and friends and is a self-confessed ‘lady that lunches’!

With two children, Maria and Helen and two grandchildren, Hannah and Michael, Anna has much to live for, maintaining a positive attitude and a determination to always want access to the most effective treatments.

Anna’s strong faith has also taken her to Lourdes once every three years since May 2005 and with each visit she prays that she will be back again three years later.