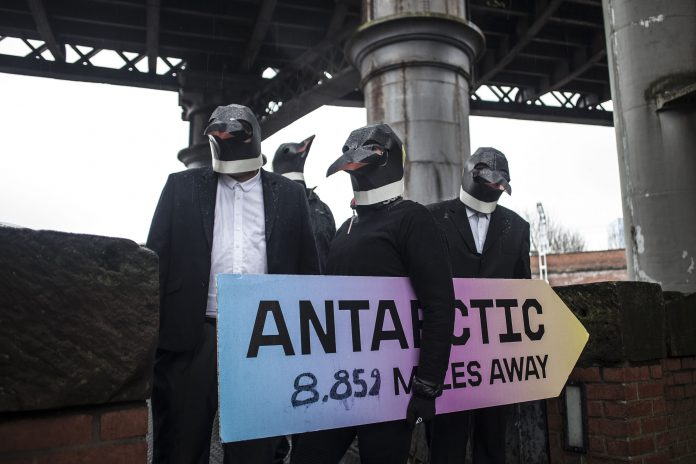 A “waddle” of penguins joined Greater Manchester Greenpeace in Manchester Castlefield at the weekend to raise awareness about the need for the world’s largest protected area to be created in the Antarctic Ocean.

Penguins have joined activists around the world, from Argentina to India, South Korea to South Africa, to campaign to protect their home .

Greater Manchester Greenpeace waddled around Castlefield exploring the industrial heritage of the area and singing in the rain as they did .

Along with their flightless friends, Greater Manchester Greenpeace spread awareness about the need for the Antarctic Ocean Sanctuary, and inspired Greater Manchester locals to call on the UK government to do all they can to ensure this proposed protected area becomes a reality.

The Antarctic Ocean Sanctuary would be the largest protected area on earth, covering 1.8 million square kilometres of ocean . It would be a safe haven for animals like penguins and whales which call the Weddell Sea home, and put the waters off limits to the industrial fishing vessels sucking up the tiny shrimp-like krill, on which Antarctic life relies .

“Greater Manchester has an historical association with the Antarctic in the support the City gave to Captain Scott and his expedition there in 1910. 108 years later and the Antarctic is again looking to the North for support: asking people to sign the Greenpeace petition and bring pressure on the UK government to exert their influence towards creating the Antarctic Ocean Sanctuary.”

Without public pressure, the governments responsible for protecting the Antarctic Ocean will continue to fall short. In late 2017, the Commission failed to create a new sanctuary in the East Antarctic because of lobbying from the fishing industry .

Greenpeace are campaigning in Greater Manchester, and across the UK, to ensure that the voices of ordinary people, concerned about the health of our planet, are heard above those of the industrial fishing industry.

The community of Greater Manchester is about making a things happen: sign the Greenpeace petition , joining others around the world, to create the largest protected area on the plant.