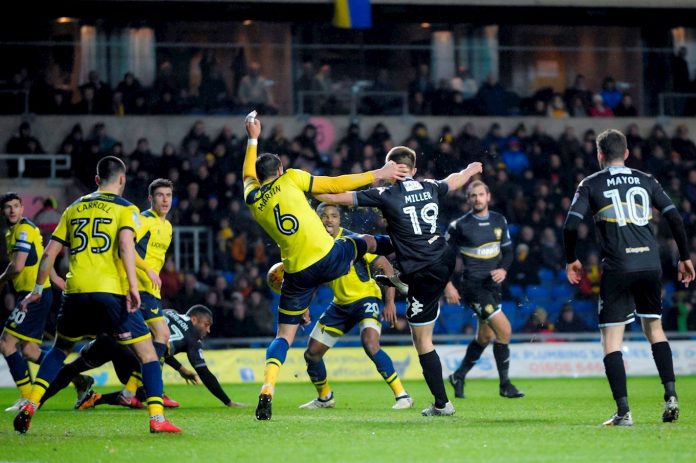 Bury began life after Chris Lucketti with a trip to Oxford United and came from behind to snatch a dramatic late 2-1 win at the Kassam Stadium.

Two late goals from substitutes George Miller and Harry Bunn earning the Shakers their first away win since Charlton Athletic in February 2017 , and their first league win since 21st November against league high-flyers Shrewsbury Town.

Wigan Athletic’s unbeaten run in all competitions extended to 14 matches as Paul Cook’s side came from behind to win 3-1 at Plymouth Argyle on Saturday afternoon.

Graham Carey put Argyle ahead from the penalty spot but Latics responded with goals from Will Grigg, Gavin Massey and Dan Burn securing a sixth consecutive away league victory.

The Latics are now five points ahead of both Blackburn Rovers and Shrewsbury Town.

Three second half goals won the game for Posh and Wellens couldn’t hide his disappointment at full time.

He said: “I don’t really know where to start. I thought we were outstanding in the first half, passed the ball well and got into some good areas.

“We had great opportunities after time and time again passing through them but again, we have a lack of movement in the box.

“We need a striker desperately, a good striker at this level who can score goals and can pull off shoulders.

In the Championship, despite Gary Madine notching his tenth goal of the campaign, Bolton Wanderers were forced to settle for a solitary point at home to Ipswich Town on Saturday afternoon.

The striker struck shortly after the restart against the Tractor Boys, but saw Joe Garner find the net late on to deny Bolton their third consecutive league victory on home soil.

Reports of my demise are garbage says Jose

Non League weekend Round up