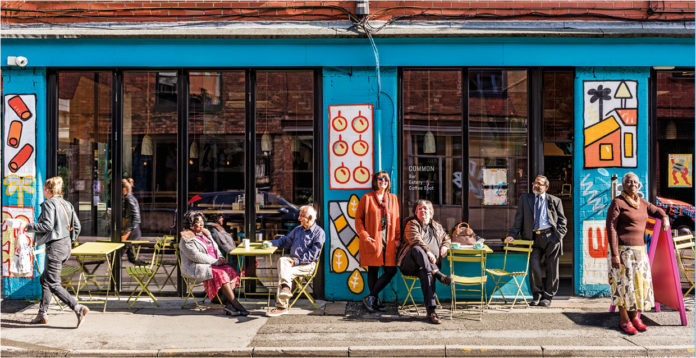 The Office for National Statistics projects that by 2040, there will be 198,000 more people aged 50+ in Greater Manchester, against a total population of approximately 3,000,000 – 21% more older people than today.

While often framed as a drain on society, research by ILC, supported by GMCA, has found that population ageing could lead to significant economic opportunities for Greater Manchester across the retail, health and transport sectors among others.

Indeed, research by ILC finds that the combined spending power of households aged 65 and over in Greater Manchester is increasing by £280 million each year.

In 2018 alone, Greater Manchester residents aged 50+ spent approximately £3.5 billion on recreation, culture, restaurants and hotels – nearly half of all spending by the city region’s residents in these sectors.

However, the report also finds that this economic potential isn’t currently maximised as older households in Greater Manchester are saving close to £2 billion each year that could be spent within the local economy.

The report identifies a number of barriers to spending, including poor health and a lack of products and services aimed at older consumers that are preventing people from spending on goods and services they want.

ILC projects that making Greater Manchester town centres more accessible and appealing to older consumers could lead to an increase in high street spending of over £50 million each year.

“The spending power of households aged 65 and over in Greater Manchester is increasing by £280 million each year.”

“Our research published last December found that by 2040, 50+ households will be spending 63p in every pound spent in the UK economy.”

“It’s time we wake up to the economic opportunities of ageing now and tackle the barriers that are preventing too many people from buying the products and services they want.”

“Our report found that Greater Manchester’s 65+ households are currently saving close to £2 billion each year. While some of this saving results from prudence in the face of future uncertainty, our research has found that factors, such as poor health, limited accessibility and a lack of inclusive design, are stopping too many of us to access the products and services we want.”

“Unlocking just some of this untapped spending power by improving the accessibility of our high streets, investing in public toilets, or designing innovative products and services that cater to consumers of all ages, would be a major boost to the city region’s economy. Our analysis demonstrates that there is a longevity dividend for Greater Manchester from meeting the needs and aspirations of older consumers.”

“Greater Manchester is ideally placed to maximise these opportunities. As the UK’s first age-friendly city region, it is at the forefront of global efforts to adapt to demographic change and population ageing, and cities and towns across the UK should follow Greater Manchester’s lead in capitalising on the economic opportunities of ageing and promoting healthy and active ageing for all.”

“This report highlights just how beneficial an age-friendly society can be to Greater Manchester’s economy and we are ready to capitalise on these significant opportunities.”

“We have been recognised by the World Health Organization as the UK’s first age-friendly city-region, and thanks to our world-leading academic research and work of the Greater Manchester Ageing Hub, this is the best place in the UK for innovation and insight into ageing.”

“Our Local Industrial Strategy is one of the only ones to recognise the economic opportunities arising from an ageing society, and sets out a clear plan for us to work with businesses to exploit our expertise. By doing so we can get ahead of the curve and take advantage of the so-called ‘longevity dividend’.“

“Through collaboration we can test, innovate and drive growth around technologies, products and services that can be brought to market to improve the lives of older people and also look at removing some of the barriers to further increase the economic potential our older residents bring.”

Drinking coffee is good for the heart

Manchester & Salford Save Our Scene Collective Raises Over £18,000