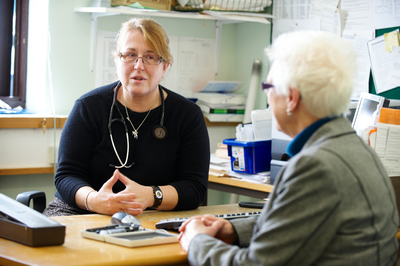 53% of GPs say they are concerned that fewer older adults are contacting them with symptoms compared to before the pandemic, according to new findings from Cancer Research UK*.

Other groups they were worried about hearing less from included patients with learning difficulties (40%), those whose first language is not English (35%), people from poorer backgrounds (23%), ethnic minorities (22%) and those with existing health conditions (21%).

The findings come from a September survey of 1,000 UK GPs who were asked to compare their experience to before the pandemic.

While some progress has been made since the first monthly survey in June, with fewer GPs reporting reductions in the number of patients contacting them (62% in June compared to 29% in September), it’s worrying some groups may not be coming forward to get the help they need.

And while some patients have told us about difficulties they’ve had making an appointment, we’re hearing from GPs they are very much open for business and are keen to see as many patients as they can.

Age is the biggest risk factor for cancer and every year more than a third (36%) of all cancer cases in the UK are diagnosed in people aged 75 and over **, so it’s particularly concerning doctors are hearing less from this vulnerable group.

Diagnosing cancer at an early stage means it can be treated more easily and gives the best chance of survival. Covid-19 is making cancer diagnosis more challenging, and progress to see fewer patients diagnosed late is likely to be held up, according to the recently published Cancer Research UK Early Detection and Diagnosis of Cancer Roadmap. ***

Dr Richard Roope, Cancer Research UK’s GP advisor, said: “I’m really concerned that less of my older patients are contacting the surgery and it’s worrying that colleagues across the UK are reporting this too. GP surgeries and hospitals are changing the way they do things to help keep patients and staff safe and people should be reassured that it’s safe to visit them. The first contact is likely to be by phone, and where appropriate a face to face will follow.

“If you’ve noticed an unusual or persistent symptom like a lump, bleeding, weight loss or pain you can’t explain, tell your doctor, we do want to hear from you. In most cases it won’t be cancer, but if it is, catching it early gives the best chance of successful treatment. For those who’ve been unable to get through to your surgery, although it might be frustrating, I would encourage you to keep trying.”