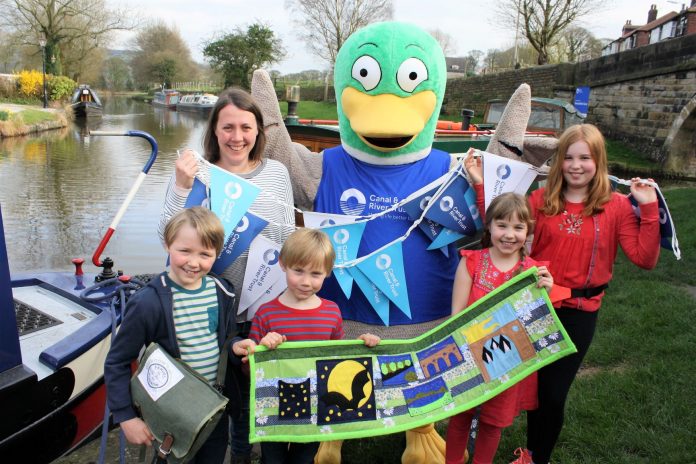 Discover Marple’s fascinating industrial history with the launch of a new walking trail, family activity pack and app focusing on the legacy of Stockport industrialist and canal entrepreneur Samuel Oldknow.

Marple Aqueduct, England’s highest aqueduct, has been extensively renovated to reveal stunning views along the River Goyt Valley. Mellor Mill, which burnt out in 1892, and Oldknow’s mansion have been excavated and the joint site opened up to the public, and Marple Lime Kilns have new interpretation and landscaping.

Funded by a Heritage Lottery Fund grant of £1.5 million and public donations to the Canal & River Trust, the project has engaged the local community on exciting events like archaeological digs, story-telling and clay clog making and enabled the three heritage sites to be opened up to the public

A creative project with two Stockport schools, All Saints primary school in Marple and Thorn Grove primary school in Cheadle Hulme, resulted in the production of a colourful children’s storybook about Samuel Oldknow, which will soon be available in Stockport libraries.

The interactive packs are suitable for children aged 2- 11 and are available to borrow, free of charge, from the Roman Lakes tearoom, near Mellor Mill.

They include pre-school story challenges, bum bags containing 18 heritage and wildlife activity cards for younger school age children and for older boys and girls, activity bags focus on a fictional apprentice who lived 200 years ago.

Lucy Rogers, enterprise manager with the Canal & River Trust explained: “This has been an amazing project which has provided a window on a forgotten world for thousands of people. The three sites are situated at various locations around Marple but are now united by a circular walking trail, which starts at Marple Railway Station. A new map and guide marks out interesting sights as well as toilets, parking and refreshment stops. The full trail has been broken down into several smaller routes and also includes notes on disabled access.

“And to complete the trio of resources – our technology revolution brings to life Samuel Oldknow’s 18th century industrial revolution with an amazing new app. Visitors simply plug in headphones and open the app as they explore the heritage sites. On-site ibeacons interact via smartphone Bluetooth to play audio clips, videos and provide an immersive experience. Using virtual reality, visitors can even point their phone cameras at a specific location to see an animation of the same view 200 years ago.

“As spring arrives, we hope lots of people will be tempted to get out on the canal towpath and around Marple to join Samuel Oldknow for a fascinating journey into the past.”

Most Popular Android Phones in the UK 2018