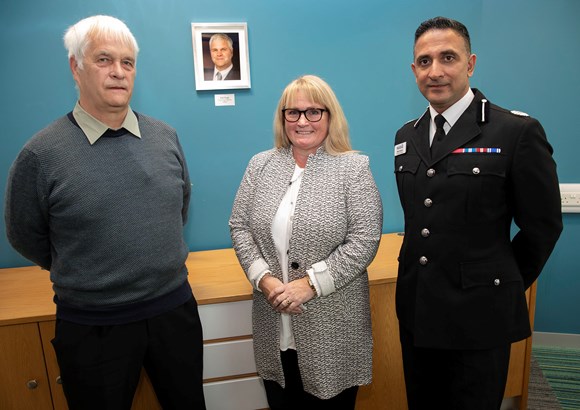 A room at GMP’s Nexus House has been renamed the “Bob Tonge conference room” following the sad death of SIO Bob Tonge earlier this year.

Bob, who was a senior investigating officer at the time, passed away at his home in Bolton on 4 January 2021.

Staff and officers at Nexus House where he was based wanted to do something to commemorate their beloved colleague and so their conference room was renamed in an official ceremony last week.

ACC Mabs Hussain and Chief Superintendent Anthony Creely met with Bob’s wife and brother before presenting a certificate to them during a short ceremony.

ACC Mabs Hussain said: “It was an absolute honour and privilege to speak with Bob’s family and share this moment with them.

“Bob was an inspirational leader who had a huge impact on staff and officers alike, and through this dedication together with stories of all those who knew him – he will be remembered for many years to come.

“He made a significant contribution to policing across Greater Manchester for over 36 years, supporting numerous grieving and victims of crime and ensuring perpetrators for some of the most horrific crimes were brought to justice.

“He was incredibly proud to serve the public and it is without doubt that he helped hundreds of people through some of the darkest times of their lives.

“Bob was a humble and kind man who always thought about how he could help and support others. He will be missed immeasurably by his team and colleagues far and wide across the force and beyond.”

Bob’s wife, Diane, expressed her thanks to his colleagues for the kind tribute and hoped that this will ensure that Bob is remembered at GMP for a long time to come.

She said: “Bob was so proud of his work and his team. He would come home all the time and tell us how fantastic his GMP colleagues were. He was dedicated and loved his job and it’s so nice to know that he was so well-thought of.”

Bob’s brother David said: “Bob was a fantastic person and a wonderful brother. He was the organiser of the family and a great person to be around. He loved his job because he felt like he was making a real difference.”

Bob joined GMP as a PC at Bootle Street Police Station in 1984 and throughout his career worked across a number of districts and departments before he retired as an officer in 2014, at the rank of Detective Superintendent within the Serious Crime Division.

Following Bob’s 30 year service as a police officer, he returned to GMP the same year where he held the position of Senior Investigating Officer in the Major Investigation Support Unit, Public Protection and the Serious Crime Division working until his sad passing.

Three arrested as investigation into machete attack in Rochdale continues