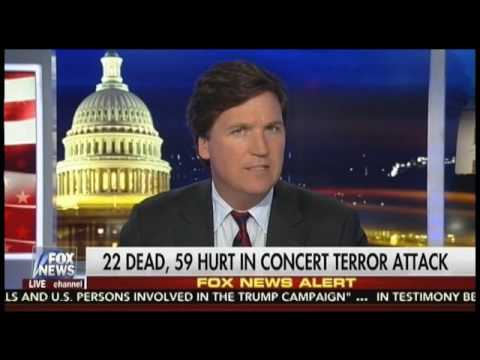 The Broadcast regulator OFCOM has ruled that the Fox News programme Tucker Carlson breached both impartiality and adequate representation rules during its programme on the 25th May, three days after the attack.

It included accusations that particular individuals and public bodies had done nothing to: counter terrorism; stop radicalisation; protect citizens from terrorism or protect “thousands of underage girls” from rape and abuse.

Further, about public leaders: that their inaction was motivated by political correctness; they valued how people saw them over the lives of children and they were forcing an “official lie” on citizens, which was “totalitarian” and “wicked”.

Further more said the regulator, “there was no reflection of the views of the UK Government or any of the authorities or people criticised, which we would have
expected given the nature and amount of criticism of them in the programme. The presenter did not challenge the views of his contributors, instead, he reinforced their views.”

OFCOM in its ruling notes that although the channel has ceased to broadcast and is no longer a licensed television service falling under Ofcom’s jurisdiction, it has decided that
publication of this short form decision is appropriate to ensure there is a complete
compliance record and to facilitate public understanding of the Code.

Mayor of Greater Manchester calls on businesses and community groups to support residents to...

Baby boy in St Mary’s hospital can have his life support turned off rules...