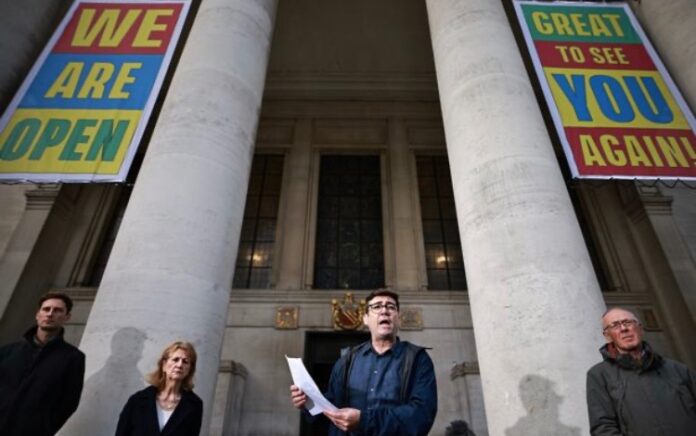 The deal which is said to be worth £30m will see non food pubs and bars lclose, but gyms and leisure centres will stay open.

Boris Johnson has said he was concerned about the rise in Covid-19 cases in Greater Manchester and called for local leaders to act.

He told broadcasters: “I am, I have to say, concerned about what’s happening in Manchester where the levels of infection are rising steeply, the level of hospitalisation is rising steeply and we do need to see action.

“I’d much rather not impose things, I’d much rather that we were able to work out something together with local authorities, with the mayor in Manchester.
“But it is up to local leaders to show the kind of leadership that we have seen in Liverpool, in Lancashire and in London.”

“The Government is claiming that the North is divided and only interested in getting what we can for our own region. That is simply not the case.

“We are all united in fighting for an 80% furlough scheme for all people affected by regional lockdowns, wherever they are in the country. Paying two-thirds of salaries will not be enough to protect the jobs of thousands – it should at least match the 80% that was available under furlough, with the minimum wage as the minimum support.

“The Universal Credit top up is not the answer. It doesn’t help everybody and takes weeks to come through. It will not prevent severe hardship for thousands of low paid workers before Christmas.

“But we won’t forget the self-employed and freelancers and other business who will be affected by these lockdowns, they also need support and we stand firm for those too.

“This is a fight for what is right.

Seven local authorities in the North East of England have been given a week’s reprieve from going into Tier 3 coronavirus restrictions, a source told the PA news agency.

It was believed council leaders in Northumberland, Newcastle, North and South Tyneside, Gateshead, Sunderland and County Durham had successfully argued to ministers that the rise in infection rate was slowing in the region, but avoiding the increased restrictions next week depended on that continuing.

The leader of Oldham Council Sean Fielding has said that imposing Tier Three restrictions in Greater Manchester will cause “untold damage” to businesses in the region.

Speaking on ITV’s Good Morning Britain the Council leader said that there was “no room for debate or negotiation” in the meeting with No.10 yesterday.

Greater Manchester isn’t in denial about the rising infection rate but the government’s solution will cause ‘untold damage’ to business.

We’re saying why do people need less money now in October than they did back in March?’

The Foreign Secretary Dominic Raab has accused Andy Burnham of “pulling up the drawbridge” over his refusal to move Greater Manchester to tier three without more financial support.

Plans submitted for the first phase of Collyhurst regeneration plan