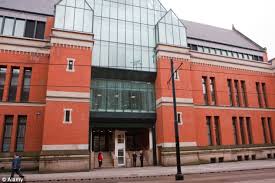 Four teenagers who went on a violent crime spree across Rochdale and Bury have been sentenced.

The 14-year-old girl was given an 18-month rehabilitation order.

Minshull Street Crown Court heard how the foursome began their 10-hour spate on Wednesday 2 May 2018 on Claremont Road in Rochdale.

The events of that night included hitting an elderly man with a brick, dragging a woman out of her car and beating her, smashing a car window while the driver was inside and robbing taxi drivers. On a number of occasions victims reported seeing a knife.

It started at around 4pm when a taxi had been driving on Bury Road that had picked up the four offenders earlier.

They grabbed the dash cam, demanded the driver’s phone and money before pouring a drink over him and fleeing.

Around an hour later, a 78-year-old man spotted his tow truck being driven away which then crashed into a nearby wall on Half Acre Lane.

As he approached the truck, the youths got out and started throwing bricks at him. One of the bricks hit the man on the head resulting in him needing hospital treatment.

The spree continued as a driver was attacked in their vehicle on Kingsway at around 11pm.

The last incident took place about 11.45pm when some of the teens got into a taxi on Dale Street and asked to go to Castleton. On Eskdale Avenue the driver was told to stop and he was attacked and threatened with a knife before they stole cash from him.

Detective Constable Damian Reed, from GMP’s Rochdale CID, said: “This group caused carnage on the streets of Rochdale and Bury, terrifying innocent people for their own entertainment.

“Not only did they threaten people but they went as far as hurting them. This included an elderly man who had a brick thrown at him and a woman who was physically dragged out of her car.

“Residents genuinely feared for their safety as these teens set about wreaking havoc armed with a weapon.

“At no point did they stop to think about how serious and scary these offences were and instead continued subjected subjecting people to these brazen robberies deep into the night.

“Today they have been held account for their selfish and dangerous actions.”