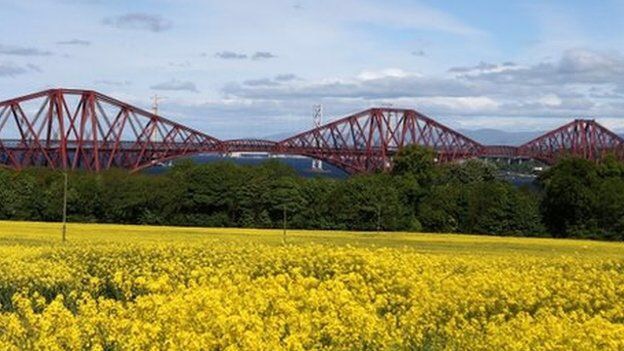 The world’s longest multi-span cantilever bridge was added to the list of World Heritage Sites at the weekend by UNESCO.

The Forth Rail crossing joined five other sites in Scotland after the UN’s cultural committee meeting in the German city of Bonn agreed the bid after spending more than a year considering its nomination.

The bridge opened  in 1890 and continues to carry passengers and freight. The committee said in its announcement that its distinctive industrial aesthetic is the result of a forthright and unadorned display of its structural components. Innovative in style, materials and scale, the Forth Bridge is an important milestone in bridge design and construction during the period when railways came to dominate long-distance land travel.

It joins New Lanark, St Kilda, the Old and New Towns in Edinburgh, Neolithic Orkney and the Antonine Wall as Scotland’s unique sites and was joined by the Rjukan–Notodden Industrial Heritage Site in Norway, Speicherstadt and Kontorhaus District with Chilehaus in Germany, two densely built urban areas in the centre of the port city of Hamburg and Arab-Norman Palermo and the Cathedral Churches of Cefalú and Monreale in Northern Sicily among new European entrants to the list.

At the same sessions, which are taking place over five days, Yemen’s Old City of Sana’a and Old Walled City of Shibam were added to List of World Heritage in Danger.

The former,situated   in a mountain valley at an altitude of 2,200 m,  has been inhabited for more than 2,500 years. In the 7th and 8th centuries the city became a major centre for the propagation of Islam. Its religious and political heritage can be seen in 103 mosques, 14 hammams and over 6,000 houses, all built before the 11th century. Sana’a’s many-storeyed tower-houses built of rammed earth add to the beauty of the site, inscribed on the World Heritage List in 1986.

It has been damaged in recent fighting between Islamic terrorists and a coalition of Arab States led by Saudi Arabia in particular the neighbourhood of al Qasimi near the famous urban garden of Miqshamat al Qasimi sustained particularly serious damage. The 12th century al-Mahdi Mosque and surrounding houses have also been affected and the majority of the colourful, decorated doors and window panes characteristic of the city’s domestic architecture have been shattered or damaged.