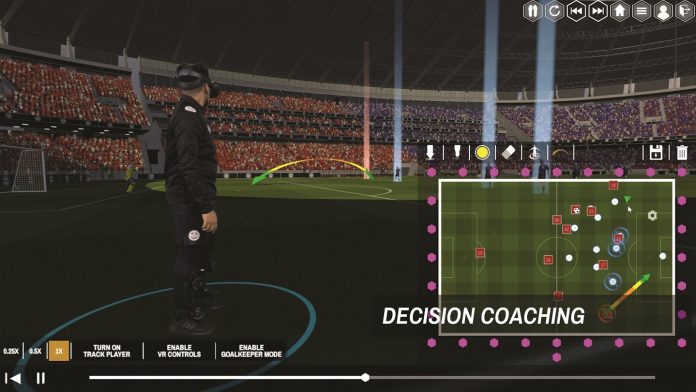 VAR was undoubtedly the big talking point of this year’s World Cup tournament in Russia but the future for the professional game will be much more about virtual reality, according to sports technology experts.

“In four to five-years-time, professional football could be using satellite tracking to create fully immersive VAR for referees – meaning they could become the player at the centre of any chosen incident in a virtual sense,” said Dave Horrocks, a world-renowned sports researcher and senior lecturer in football coaching and analytics at the University Campus of Football Business (UCFB) in Manchester.

“In effect, it means referees will have the technology to virtually become a goalkeeper and face the corner that’s just happened on the pitch to truly see a particular incident of play from virtually any angle.”

The satellite VR system called Mi Hiepa is already in use for players and is used to assess their actions throughout training, in order to improve their performance on match days.

The tracking system is called Trac Ab and is used at most of the top stadiums around the world by the elite football clubs in the major football leagues.

But Dave, who lectures students at UCFB Etihad Campus in Manchester and is considered one of the leading sports researchers in the UK, says it is already being developed to become the next iteration of the VAR system.

“It will enable the referee to put himself in Neymar’s shoes and know, without any element of doubt, whether he has been kicked or fouled or not. That means the decision he makes will not have any margin for error and will be as accurate as if he had been the player involved in the incident,” Dave said.

Trac Ab and VAR are also already used for player analysis in top level football, but the immediate future will likely see the roll-out of VAR for refereeing decisions throughout elite football leagues around the world.

Dave believes the current VAR system will borrow ideas from the American NFL, where coaches are allowed a set number of challenges to decisions per game, and will likely roll out in the English Premier League and other elite leagues next season.

He said: “The use of VAR during this summer’s World Cup was very much a trial. There will now be a review of the system to assess whether it was a success or not. If it is deemed a success, which I imagine it will be, I’d expect VAR to be rolled out in the Champions League and Europa League first before then going into full-time use in the Premier League, Serie A and other elite leagues the following season.

“I’d expect VAR to be in use in the Premier League by next season or the season after.”

In NFL matches coaches can challenge decisions three times in each half of the game. The bench and the coaches also have a live feed of the game and, within seconds of an in-game incident occurring can see exactly what has happened on their monitor. That means any challenge from the bench is based on more accurate information and images and, in theory, should stop coaches challenging all and any VAR decision frivolously.

In NFL the referee also has to explain their decision, which stops much of the time-consuming debate between the team being penalised and the referee.

Dave added: “I imagine we will see a similar rule change in the Premier League before full adoption of VAR in the professional game. Right now Premier League bosses will likely be debating how VAR can be improved to ensure accuracy of decision-making by the referee but also to ensure as little interference in the course of play as possible.”