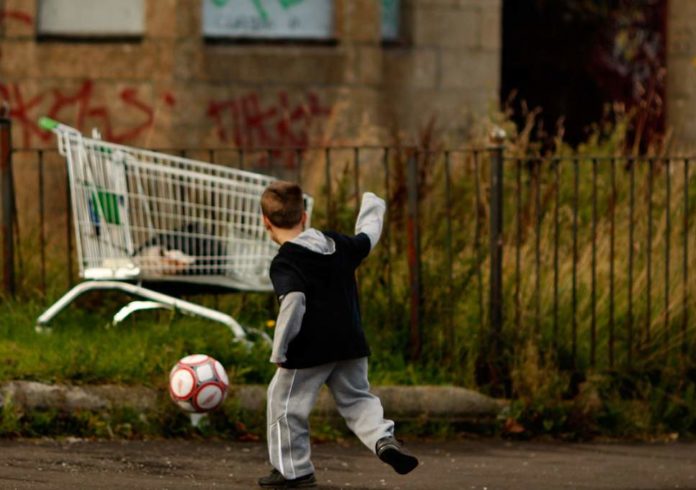 New research carried out for the Child Poverty Action Group to coincide with the publication of the annual poverty statistics found that the 4 year freeze on children’s benefits alone will lead to average loses of £240 per year for families with children and will result in 100,000 more children in poverty by 2023-24.

This is just one way in which families are losing out – for many the losses are much greater because of the freeze in help with housing costs and other benefits, and the impact of the benefit cap and two-child limit says the report.

Over the decade from 2010 to 2020, child benefit – a vital lifeline for families struggling to make ends meet – will have lost almost a quarter of its value simply because it has not been updated as prices have risen.

“Today’s poverty figures make grim reading with more than 4.1 million children still in poverty and a jump in the proportion of poor children in working families. Despite high employment, today’s figures reveal that 70% of children living under the poverty line have at least one parent in work. That is not an economy that is working for everyone. The increase in child poverty in working families was widely anticipated and could have been avoided. A coalition of charities came together to ask the Chancellor to take the opportunity of his Spring Statement to end the benefit freeze and bring families in from the cold. But the government chose not to, missing another opportunity to do the right thing for children and families despite the fact that the freeze had already achieved its planned savings.

“The question that arises from today’s figures is why the Government is not making progress on child poverty when 4.1 million of our children will have diminished childhoods, their health and education compromised and their future earnings jeopardised. The jobs miracle has not been that miraculous in its effects on child poverty. The face of child poverty is also getting younger – with the proportion of poor children who are under five having risen from 51% to 53% – and that is really worrying.

“Investing in children is the most significant investment we as a nation can make in our future. We share a moral responsibility to protect children from hardship and enable them to fulfil their potential, but deep social security cuts for working and non-working families are restricting the life chances of a whole generation. At this critical point in the UK’s history, we need to step back and ask what kind of country we want for our children. One in which millions are constrained by poverty or one that puts its belief in justice and compassion into practice when we make choices on public spending?

“In 2010 the UK was half-way to achieving the target to get child poverty down to 10 per cent by 2020. Now, a year away from what should have been a milestone moment for achieving long term change, child poverty risks reaching the highest level we’ve seen since records began in the 1960s. The Child Poverty Act, which had cross-party support, has been dismantled, along with the poverty-reduction targets it enshrined. Today, outside Scotland there is no clear Government strategy for tackling child poverty and, incredibly, no poverty-reduction targets.

“Today’s grim figures must be the point at which we turn the tide of child poverty again. In the short term this means an end to the benefit freeze, restoring the losses that have pulled families into poverty and re-building cross-party support for a comprehensive child poverty strategy with ambitious targets. Today’s children deserve nothing less.”

Clayton football coach who rewarded his young played by sexually abusing them in the...