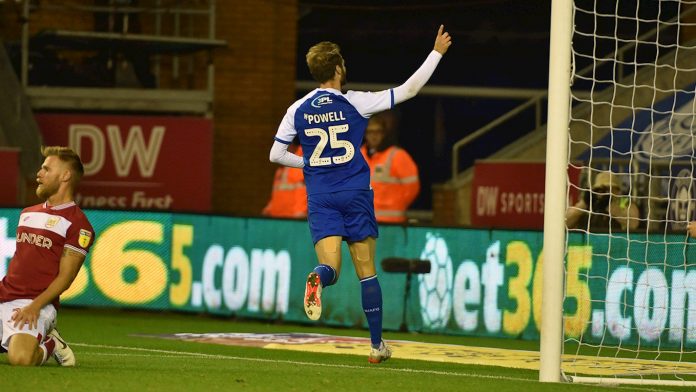 Wigan lifted themselves up to third place in the Championship with a 1-0 win over Bristol City at the DW Stadium on Friday night.

Nick Powell’s header proved the difference against Bristol City at the DW Stadium.

On a tense evening, where both sides had the 3rd spot in the Championship table in their sights, Powell’s second-half goal earned a valuable three points for Paul Cook’s side, who won their fourth game out of five on their own patch this campaign.

Latics boss Paul Cook heaped praise on his team’s efforts during a tough week of fixtures.

“It feels great. The feelings in football we all live and dream to be this high in the league and it’s a fantastic achievement for the players, staff and everyone at the club. To come from where we where when we got relegated 18 months ago to be in the position we are in now is excellent.

Ten man Bolton Wanderers put in a resolute defensive display at Portman Road on Saturday afternoon to ensure that they took a share of the spoils away from their clash with Ipswich Town.

Marc Wilson received his marching orders in the first half for the Whites after being deemed to have brought down Kayden Jackson on the edge of the box, but Phil Parkinson’s men responded by frustrating their Suffolk counterparts and even came close to taking all three points.

“We shot ourselves in the foot so I’m disappointed” said Rochdale Manager Keith Hill after their 4-1 defeat at Sunderland, “but I hope it’s a learning curve for the players. It’s trying to salvage something in the second half and I’m putting substitutions on to try and change it. We had the first opportunity of the half and there’s a great save from the goalkeeper, but we never really got going.”

A brace from Josh Maja and a penalty from Lynden Gooch saw the hosts go into the break 3-0 up, despite a promising start to the game from Dale.

Gooch added another after the break, before Matty Done grabbed a consolation goal after coming on as a second-half substitute.

The 10 men of Carlisle United became the first team to leave the Energy Check Stadium at Gigg Lane with all three points this season, thanks to a second half goal from Richie Bennett.

Manager Frankie Bunn was content with the point after Oldham scored two goals in three minutes to earn themselves a draw with Colchester United.

Another Sam Surridge brace and a header from Captain Peter Clarke helped Latics come back from 1-3 down to gain something from the game.

Despite the disappointment of not picking up the three points Bunn was happy enough with the point having played well in previous games against MK Dons and Newport and not coming away with anything.