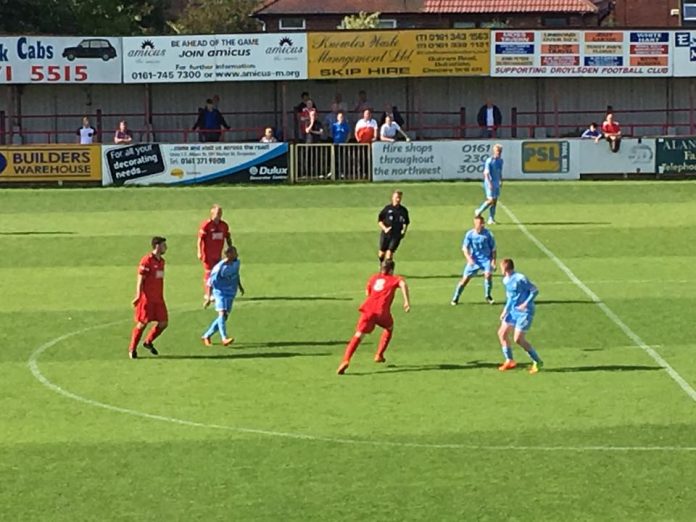 Ashton United, Droylsden, Stalybridge and Hyde all progressed into the second qualifying round of the FA Cup at the weekend.

The tie of the round was surely at the Butcher’s Arms when for the second successive cup tie, the Bloods won a seven goal thriller at the expense of fellow league side Colwyn Bay.

Ashton progressed  to the next round of the FA Cup at Marine, the score line from the teams’ last meeting and avenging the Mariners’ victory in last season’s FA Trophy while Hyde went through at the expense of Kendal thanks to a solitary goal from Phattharaphol Khamsuk .

Stalybridge put their disappointing start to the season behind them thanks to goals from Liam Dickinson and substitute Theo Bailey-Jones against high flying Farsley Celtic.

Altrincham Manager Phil Parkinson described his team’s performance as shambolic after his players surrendered a 3-0 first-half lead to Abbey Hey, the Alty boss demanded a marked improvement in Tuesday night’s replay at The J.Davidson Stadium and revealed he plans to strengthen his injury-depleted squad in the next few days.

It was the end of the FA Cup journey though for Radcliffe Borough going down 3-1 to Ramsbottom at Shaw Lane, all the goals coming in the first half.

There was league action in the Conference North.Curzon Ashton holding Salford City to a point at the Tameside Stadium, Lois Maynard’s second-half equaliser secured a point for the Ammies after Max Leonard had put the home team in front in the first half.

FC United fell at home to Leamington, Kieran Dunbar and Colby Bishop put the Brakes two nil up before Scott Kay pulled one back for the home side with six minutes left on the clock while Stockport County were held to a 0-0 draw by Bardford Park Avenue at Edgeley Park in a frustrating afternoon during which a series of County attacks were thwarted by a resolute Bradford Park Avenue defence.