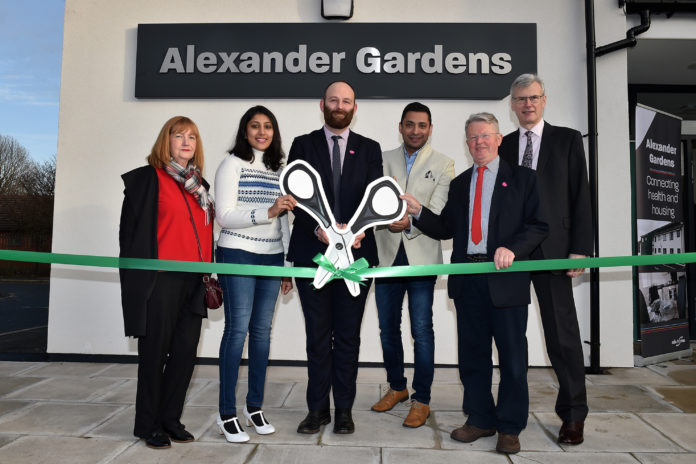 The facility provides affordable homes for doctors, nurses and other clinical staff who work at Salford Royal NHS Foundation Trust.

Housing association Salix Homes teamed up with the Trust after it was revealed they were struggling to fill 200 vacancies at Salford Royal Hospital with the lack of affordable accommodation cited as one of the barriers to attracting people to the area.

Lee Sugden, chief executive at Salix Homes, said: “Today marks a proud day for Salix Homes and for Salford as we welcome the first residents into their brand new homes at Alexander Gardens.

“The site itself has stood empty since the Boxing Day floods in 2015, so this partnership with the NHS presented an opportunity for us to not only bring an empty building back in to use and create desperately needed homes, but also to help our local hospital attract much-needed key workers into Salford, which benefits the whole community.”

Salix Homes has spent more than £2million converting the former sheltered housing complex on Gordon Street into 26 modern, one and two-bedroom apartments.

The project was partially funded thanks to a £780,000 grant from Homes England Shared Ownership and Affordable Homes Programme

Among the first residents to move in is nurse Abhik Jacob, 32, and his partner Pretty Mary Zachariah, 27.

The pair moved over from India four years ago and had been working at a London hospital before relocating to Salford last month.

Abhik, who has recently started work in Salford Royal’s Emergency Assessment Unit, said: “We wanted to relocate to this area as we have family nearby in Bolton and the cost of living is more affordable than in London.

“Finding somewhere affordable to live close to where you work is very difficult, so Alexander Gardens is perfect for us and has made the stress of relocating much easier. We’re enjoying getting to know the area and it’s great that my commute to the hospital only takes 15 minutes on the bus.”

Alexander Gardens was devastated three years ago by the worst flooding to hit Salford in decades. The former residents were all rehoused and since that fateful night extensive flood resilience measures have been implemented within the facility and the wider area to help protect against future floods.

“This fantastic partnership will help us offer new starters a way to settle into the local community as they embark on their career at Salford Royal.

“We hope that by providing affordable, quality homes on a short-term basis we can help take away some of the pressure of moving to a new area; enabling people to concentrate on their new job and building connections whilst they establish themselves in the city on a long-term basis.

“We hope this venture with Salix Homes is the first of many initiatives where we believe we can collaborate to improve the health and wellbeing of people living and working in Salford.”