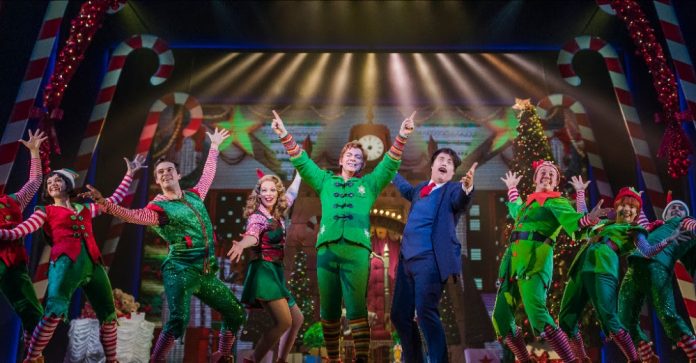 Official production photos have been released for Elf: The Musical which heads to The Lowry, Salford next week for a limited run. Opening on Fri 24 November 2017 and running through to Sat 14 January 2018.

Elf: The Musical opened at Theatre Royal Plymouth on Sat 11 where it runs until Sat 18 November. It then heads to the Salford venue which will host the show’s first Christmas season outside of London.

During the run at The Lowry a Gala Performance will be held on Tuesday 28 November in aid of Care After Combat with net ticket income from the performance donated to the charity. Care After Combat are a UK based charity providing professional assistance for the well-being of Veterans and their family.

Starring in the production will be West End and ITV ‘Superstar’ winner Ben Forster who reprises the key role of ‘Buddy’, Liverpudlian chart topper Liz McClarnon starring as ‘Jovie’, whilst James Allen,Charlie Birtwistle and twins Lochlan and Riley White, all from the North West area, will appear in the shared role of Michael Hobbs.

The shows Christmas 2017 season cast also includes Joe McGann as ‘Walter’ and Jessica Martin as ‘Emily Hobbs’, who both reprise their roles from the record-breaking 2015 Christmas run in the West End. They are joined by Louis Emerick in the role of ‘Santa Claus’, Lori Haley Fox as ‘Deb’ and Graham Lappin as ‘Store Manager’.

Based on the beloved 2003 New Line Cinema hit starring Will Ferrell, Elf is the hilarious tale of Buddy, a young orphan child who mistakenly crawls into Santa’s bag of gifts and is transported back to the North Pole. Unaware that he is actually human, Buddy’s enormous size and poor toy-making abilities cause him to face the truth. With Santa’s permission, Buddy embarks on a journey to New York City to find his birth father, discover his true identity, and help New York remember the true meaning of Christmas.

Michael Rose in association with the Bord Gais Energy Theatre, Dublin present the Theatre Royal Plymouth production of Elf at The Lowry.

Christmas in the clouds