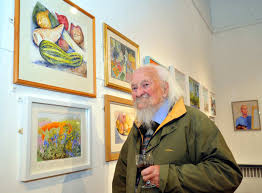 This popular annual exhibition showcases work from more than 40 local artists in a variety of styles and subject matter, with work on display until 3 February.

Bury Art Society was established in 1949 and has had notable past presidents including L.S. Lowry.

This year a special retrospective exhibition of David Swithenbank, the current president of the society, will be shown alongside the annual show until 27 January. Mr Swithenbank, now aged 92, has been an active and supportive member for many years.

The retrospective exhibition showcases his life’s work, inspired by his travels in Europe and India, depicting the wildlife, cultures and landscapes. Recurrent themes include music, song and dance reflecting his life’s interests not solely as an artist but as an active participant making a lasting contribution to the local area.

The exhibition will open at 10.30am on the 2nd December, followed by a musical performance by Oliver Bishop which is based on a recent Heritage Lottery Funded research project ‘Bury Art Society; Archiving People & Place’ featuring recordings from the Kirklees Trail, Elton Reservoir and on the East Lancashire Railway.

There will also be a series of free talks as part of David Swithenbank’s special retrospective exhibition, from 11.30am to 1pm. Three of Swithenbank’s close friends – Alan Seymore, John Ireland and Chris Woods – will be talking about morris dancing, poetry and the history of Holcombe and Swithenbank’s contribution to each one.

Bury Art Museum is open Tuesday–Friday (10am to 5pm) and on Saturday (10am to 4.30pm). Admission is free and the museum is fully accessible. It is located on Moss Street in Bury town centre, adjacent to the bus/Metrolink interchange.

The Coral and The Hoosiers announced for Rochdale Feel Good Festival