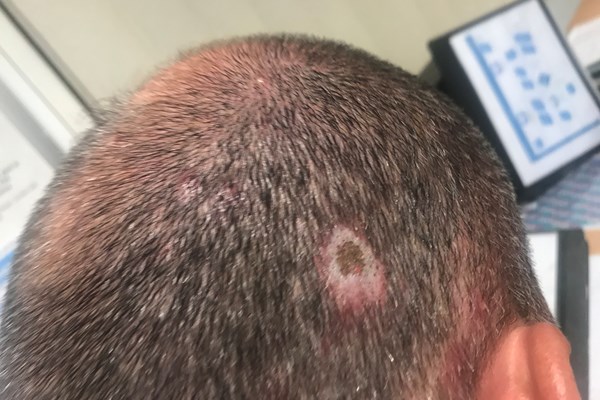 A fireman of almost 30 years’ firefighting service was last night hit by a firework aimed at a crew from Blackley who were tackling a bonfire in Crumpsall Park, Ash Tree Road, Manchester.

Firefighters were called to the scene just after 8.45pm yesterday.

As 50 year-old WM Paul Marston and a colleague approached the blaze in the south side of the park, a group of roughly 15 youths dressed in black began to aim lighted fireworks in their direction.

As WM Marston turned to return to the fire engine, a firework ricocheted off his colleague and lodged under the back of his helmet, burning hair and skin. Remarkably, other than a small burn above his right ear, the Watch Manager is otherwise physically unharmed – he was treated with a burns pack at the scene before requiring further assessment at North Manchester Hospital.

Speaking the morning after the attack, WM Marston said: “I have been a firefighter for Greater Manchester Fire & Rescue Service for 27 years and have never before been injured in an attack – all we were doing was responding promptly and professionally to an emergency call. I’m Manchester born and bred and work hard to help protect my community – it’s my job, I’m proud to serve, but I must confess last night’s incident has shaken me.

“I’d not been on shift for two hours before we were called to the park. As we approached the bonfire I saw a group of youngsters and my intention was to go over and speak to them about fire safety. But as soon as we saw fireworks being lit we got a sense of what was about to happen.

“When I was hit, the pain wasn’t the thing I remember most clearly but the impact followed by the horrible smell of burning hair. It lodged inside my helmet and, as we were retreating from the scene, I struggled to get it off. I’m very grateful to my colleagues on White Watch and the staff at the hospital for their medical treatment.

“I’ll be honest, in the hours that followed I felt furious. But I soon calmed down and have actually stayed on shift all night – it’s my responsibility to be at work, protecting my local community. But the next time I’m called to an incident like a bonfire or other small fire in a public space I expect last night will be on my mind.”