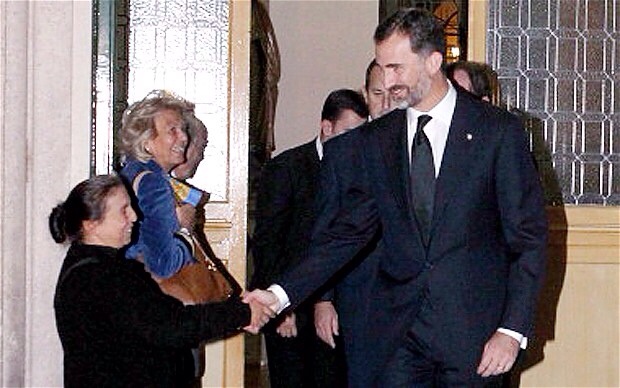 For almost 40 years, King Juan Carlos ruled Spain taking the country from the dictatorship years of General Franco to becoming a fully democratic member of Europe.

Two weeks ago he made a shock announcement to abdicate, paving the way for the coronation of his son, Crown Prince Felipe, on Thursday. Dr David Jimenez Torres, a lecturer in Spanish studies at The University of Manchester, explains the issues behind the throne.

Polls taken since Juan Carlos’s announcement show that most Spaniards believe that his abdication is good for the country, given his age and the loss of political credit he had suffered in recent years. They similarly show that Prince Felipe, his heir and the next king, is very well regarded.

“Polls taken since Juan Carlos’s announcement show that most Spaniards believe that his abdication is good for the country, given his age and the loss of political credit he had suffered in recent years. They similarly show that Prince Felipe, his heir and the next king, is very well regarded.

“Similarly, the Spanish constitution leaves no room for doubt on the legality of the abdication and the proclamation of Felipe as king. And the support of the two main parties in Parliament means that Felipe’s coronation has overwhelming parliamentary support. The abdication law was approved in the lower chamber on June 11 with 85% of Yes votes.

“But despite all this, there is much debate among Spaniards surrounding the abdication. Firstly, there is the question of why Juan Carlos has chosen to do this now, and in such an abrupt fashion. For, despite the official line that this has been planned for months, there are strong indications that the process has been hastily put together.

“Questions over who the next leader of the Spanish Socialist party will be may partly explain it. There is also an ongoing corruption scandal involving Juan Carlos’s daughter, Cristina. But the situation in Catalonia, where the regional government wishes to hold an independence referendum in November, despite its unconstitutionality, is also key.

The Crown will be expected to play some role in the crisis that will likely unfold come November, and perhaps Juan Carlos wished to delegate this task to a younger and more energetic person.

“There is also a strong debate on whether a referendum should be held on the Monarchy before Felipe is crowned king. Political forces and figures from the Far Left have called for such a referendum both in Parliament and in the streets. Although there is no constitutional requirement to hold it, the pro-referendum message has struck a chord with a substantial number of Spaniards who wish for more direct participation of citizens in government.

“The pro-referendum message has also benefited from the growing disenchantment towards the 1978 constitutional arrangement, of which Juan Carlos had been one of the main drivers. And it also benefits from the emotional attachment that the Spanish Left has developed in recent decades towards the memory of the Spanish Second Republic on the 1930s, the regime that was destroyed by the Civil War.

“So although polls show that most Spaniards still prefer a Constitutional Monarchy to a Republic, the fact that they are not being asked their opinion on the issue might cast a negative light on the new King, whose legitimacy some are questioning even before the start of his reign.

“Also important has been the reaction of Catalan and Basque nationalists. Both of their parties abstained in Parliament during the vote on the abdication law, claiming that what occurred within the Spanish state was not their concern. The head of the Catalan regional government also declared that the presence of a new king does not alter his project to hold the independence referendum.

“Felipe has enormous challenges ahead of him if he is to do anything to alleviate Spain’s economic, political and territorial crisis; and he may not have enough time or political credit for it.”