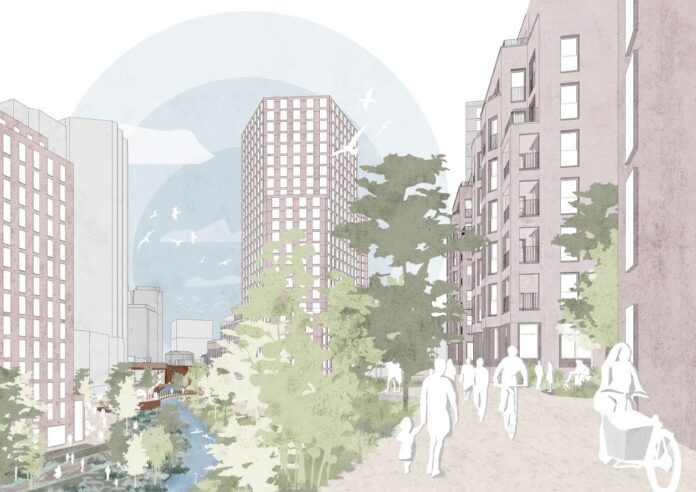 Far East Consortium (FEC) has unveiled its vision for the sustainable regeneration of Manchester’s Red Bank neighbourhood, which will create 5,500 new homes within Victoria North.

Working with international design practices Maccreanor Lavington and Schulze+Grassov, FEC has applied its ‘Wild Urbanism’ concept across the Red Bank masterplan, connecting the built environment with the urban nature of the River Irk Valley, to create a unique city neighbourhood.

The vision, which applies ‘15-minute neighbourhood’ principles, includes the prioritisation of green space, biodiversity and public realm, with just 50% of land within the masterplan dedicated to high-density residential development. The neighbourhood, which is targeting net-zero carbon in operation, is expected to provide new homes for a diverse mix of people; building a new community with the long-term infrastructure and social amenities to support sustainable growth.

Other key features within the masterplan for the largely brownfield site include a focus on active travel, 5 hectares of publicly accessible green space – including the revitalisation of St Catherine’s Wood as part of the wider City River Park – improvements to the River Irk and new social and community facilities, including initial proposals for a new primary school and health centre.

Integral to the regeneration project is a connected, safe and inviting network of public spaces where pedestrians and cyclists are prioritised to support healthy, active lifestyles. The strategy has been designed to increase connectivity between Red Bank, Collyhurst, Cheetham Hill, New Cross and Manchester city centre while creating an accessible frontage to celebrate the River Irk.

£51.6m of investment, secured through a bid by joint venture partner Manchester City Council (MCC) via the government’s Housing Infrastructure Fund (HIF) will see the Council deliver critical infrastructure to help unlock the neighbourhood, including re-naturalisation of the River Irk as well as the first phase of the City River Park, site remediation, access routes and new utility connections.

Hilary Brett-Parr, project director at FEC, said: “The River Irk and its valley provides an opportunity to create a unique, sustainable, residential community within an incredible setting.

“Our ambition is to establish Red Bank as a key location within Victoria North, unlike anywhere else in the city, providing plenty of access to wild, green spaces within a healthy urban environment for people to live, visit and work.

“To support the new community in Red Bank, we also recognise the importance of social and community infrastructure and at this early stage have identified locations for a new health centre and primary school needed to allow the new community to flourish. We will be working closely with MCC to develop these proposals.”

Cllr Gavin White, Manchester City Council’s executive member for housing and employment, said: “Red Bank has a huge amount of potential, as part of our ambitious Victoria North project, and aside from the overall investment opportunity to deliver 5,500 new homes on this brownfield site, the area lends itself to a bold and innovative approach to development – putting green space, active travel and sustainability at the heart of the investment. Red Bank gives us a blank canvas to create from scratch a blueprint for sustainable urban development in this part of North Manchester alongside the River Irk.”

Local residents and stakeholders are invited to view the plans as part of a public consultation programme with events taking place on 8th and 9th December.

FEC will deliver circa 4,000 of the new homes (including affordable) on land under the control of the JV. FEC’s hybrid planning application is targeted for submission in Q2 2022. The majority of the new homes are intended to be delivered over the next decade with circa 400 homes being completed by FEC every year.