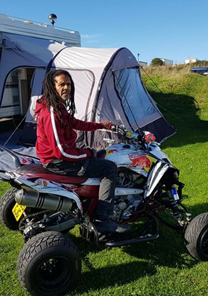 The family of a man who died following an assault in Leigh, have described him as “a loving, caring person who would help anyone in

Paul Ologbose was injured during the altercation outside Higher Fold Sports and Social Club, Kensington Drive, Leigh and taken to hospital where he sadly died as a result of his injuries later that day.

A 43-year-old man has been charged with manslaughter.

His family said: “Our beautiful dad, Paul, passed away surrounded by his four children, brother and family on the 23rd January. He was taken from us too soon, and in the worst way possible, which as a family we will never get our heads around.

“Our dad was a family man who loved all his children and grandchildren very much, and made a big impact on so many people’s lives. Everybody loved him for who he was, a loving caring person who would help anyone in need.

“Our dad was the go to person for anything to do with engines, he could fix anything! He loved his job, with window cleaning meaning everything to him.

“Our dad had his business for 31 years and loved every single day of it. He would make time for all his customers, even if it was because he seen a car he liked in their garden, or to ask for a brew with 3 sugars.

“Our dad was one in a million. We hope you are dancing away to your Bob Marley music and wearing your Bob Marley Hat which you never took off. Your two grandchildren love you so much.

“Rest easy Dad and Grandad Bushy, we all love and miss you so much.”

The day after the incident, sometime between 5pm and 11pm (Monday 24 January) Paul’s home on Kenilworth Drive in Leigh, was broken into by unknown offenders, who searched the property before fleeing the scene.

Officers investigating are keen to speak to anyone who may have seen anything, or have CCTV or doorbell footage of the area at the time.