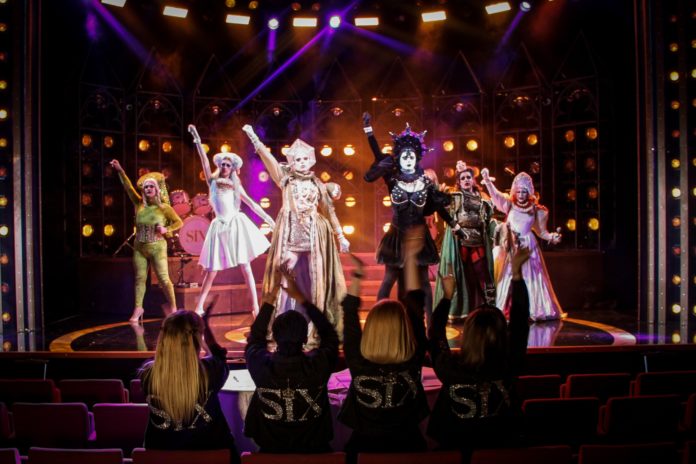 With ‘SIX’ on The Lowry stage throughout Christmas and into the New Year, our Manchester Queens polish their crowns and welcome them with open arms.

From Tudor queens to pop princesses, SIX sees the six wives of Henry VIII take to the mic to tell their own personal tales, remixing five hundred years of historical heartbreak into an 80-minute celebration of 21st century girl power. The songs from the show have proved to be a chart storming sensation racking up 50 million streams and adding 300,000 daily.

The Drag queens took on the musicals’ pop hit song ‘Ex-Wives’ with their amazing lip syncing skills to show the SIX queens exactly what they’ve got, as they were welcomed onto the SIX stage with open arms.

Head of family gorgeous, Cheddar said: “We were lucky enough to catch the show at the premiere last week! I loved the way it delivered such an empowering message through a girl-band inspired score worthy of any pop diva. As any drag queen will tell you, you should never underestimate the power of a sequin and a catchy tune to get your point across, and this show really sparkles! Getting to meet the amazing cast has been the icing on the cake!”

Athena Collins plays Catherine Parr, she said: “SIX gives an insight into the lives of Henry VIII’s wives with a modern twist. You get to hear their side of the story, which you don’t particularly learn about at school. You’ll learn there is so much more to these fierce and fiery women than you first thought and it’s so much fun.”

The drag queens took on the fierce nature of the six wives and created a lip sync performance of the SIX opening number, as SIX queens, Maddison Bulleyment, Jennifer Caldwell, Cassandra Lee and Harriet Watson watched on with admiration.

SIX has just completed a sell out run in the Quays Theatre and now moves into the Lyric theatre for it’s final week in Salford from Tuesday 7 – Saturday 11 January with a sing-a-long performance on Friday 10 January.