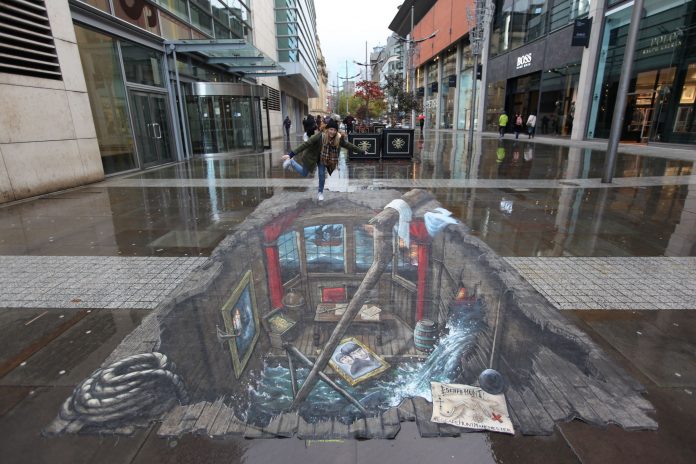 To mark the arrival of Escape Hunt Manchester’s brand-new five star escape room adventure, Blackbeard’s Treasure, a spectacular 3D interpretation of this mesmerising game has been created in the city centre today.

As immersive as the escape room game itself, the anamorphic painting featured a unique portrait of Manchester’s very own Liam and Noel Gallagher, as fans have never seen the Oasis brothers before. The unique street art, created by world-renowned street art company, 3D Joe & Max, captivated passers-by making them want to jump right into the artwork.

This exhilarating game at Escape Hunt Manchester, which opens today, transports players back in time, to the galleon of one of the most notorious pirates in history, the terrifying Captain Blackbeard.

With the ship shot to pieces and sinking fast, players and their scurvy shipmates go in search of Blackbeard’s fabled loot but find themselves trapped aboard. With just 60 minutes before they go down with the ship, teams have to work together and solve a series of mind-bending puzzles to make their escape with the treasure and their lives.

The other game available is The Fourth Samurai, which takes budding samurai warriors deep into ancient Japan, where the imperial emperor has ordered players to defeat the evil warlord Tanaka Masamune. The only way to beat him is to steal the magic stone from the handle of his sword – but first the team must escape from the dungeon his henchmen have thrown them into.

Open to teams of between two and six players, Escape Hunt is perfect for friends, family or work mates in search of a fun and an exciting challenge. The game begins with a mission briefing from a talented Games Master, followed by an hour to crack a series of clues and puzzles.

From cryptic word play to physical dexterity, players must work as a team and break out of the room, before celebrating their escape in the premium lounge and taking advantage of the well-stocked bar.

Games are suitable for players age 10 or over. Anyone aged under 16 must be accompanied by an adult.