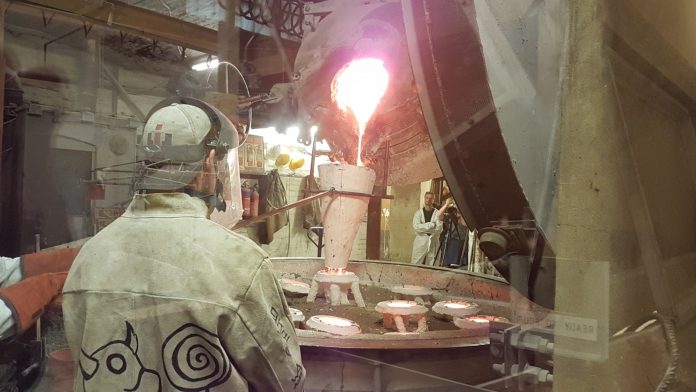 The  creation of Hazel Reeves’ sculpture of Emmeline Pankhurst reached its dramatic climax this week, as the traditional ‘pour’ took place.  With the molten bronze that will create the cast reaching temperatures of 1,200 degrees centigrade, this was an intensive and colourful moment.

Our Emmeline’s final resting place will be in Manchester, but for this symbolic occasion, it was in the London based foundry, Bronze Age Sculpture Casting Foundry, that the pour took place. This is ‘lost wax’ bronze casting, a highly skilled process that dates back some 6,000 years. The process entailed 300kg of glowing molten bronze being poured into a hollow vessel exactly in the shape of Emmeline.

Sculptor Hazel Reeves said, “After months spent working by hand on the clay sculpture of Our Emmeline, this was when the magic of the alchemy took place, as we witnessed the process that turns the clay into bronze.  The pour of the bronze never fails to thrill!”

Andrew Simcock, Chair of the Emmeline Pankhurst Statue Committee, said, “To reach this moment was to see all of the months of campaigning, fundraising, planning and work coming together for Our Emmeline.  It has also been the time to reflect upon the skill of Hazel, and it was wonderful to see this stage of her work unfold at the Foundry to create what will be a magnificent piece of public art and a testament to the legacy of Emmeline Pankhurst and all those who have supported this project.”

Minster for Equalities Baroness Williams said, “In this centenary year it is important that we mark the many achievements and contributions of women in politics, society and beyond.  The Government Equalities Office Centenary Fund has enabled women across the nation to do just that.

“This Emmeline Pankhurst statue – created by a leading female sculptor – is a brilliant way of continuing to remember the change that women have made in the last hundred years, and inspiring the next hundred years of success, courage and determination.”

Once the work at the Foundry is complete, Our Emmeline will then travel over 200 miles to reach her home city of Manchester.  Here she will take her place in St Peter’s Square at the heart of the city, in recognition of her place in history and the legacy that lives on.  Emmeline Pankhurst began what was to become known as the suffragette movement from her home in Manchester, now the Pankhurst Centre, and it is thanks to the votes of thousands of people that she will be immortalised as a statue.

As a final honour to her story, the unveiling of Our Emmeline will take place on Friday 14 December 2018 to mark 100 years since the first women voted in a UK General Election, connecting her story and legacy to this historical moment.

The statue will be the first of a woman in Manchester since Queen Victoria was unveiled in Piccadilly Gardens in 1901.  Emmeline Pankhurst was selected as the public’s chosen female icon to be immortalised as a statue from a long list of 20 inspiring Mancunian females.

As well as voting for Emmeline, the public also voted for Hazel Reeves’ ‘Rise up, women’ as the winning design from a short list of six maquettes.  The unveiling on 14 December will be the culmination of a campaign launched in 2014 to celebrate the significant contribution of women to the city.