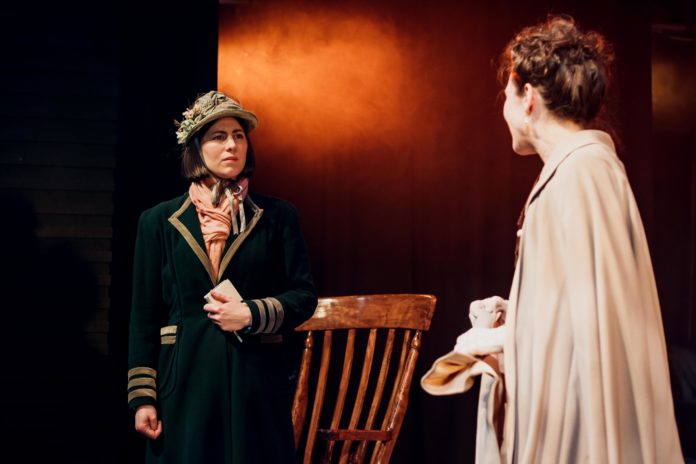 Following sold out houses at HOME Manchester, with their breath-taking production of ‘JESUS HOPPED THE A’ TRAIN’, Elysium Theatre Company returns to Manchester with its critically acclaimed production of Strindberg’s MISS JULIE.

Midsummer night in an old manor house in the North East. For one night only servants and masters are equal, and drink and dance together into the small hours. With the Lord away, his daughter, Miss Julie, strays into the servants quarters in search of the Head Butler, John. As night draws in, their mutual attraction drives them together with fatal consequences…

Strindberg’s electrifying play – written in 1888 – of sex and class comes to passionate life in this powerful new co-production between Elysium Theatre Company and Queen’s Hall Arts Centre, Hexham, directed by Elysium’s co-founder, Jake Murray and adapted by Murray to be set in the North East of England, where this production toured earlier this year.

In the title role of Miss Julie is actress Alice Frankham. Playing John is fellow Elysium co-founder, Danny Solomon – both actors are familiar to Manchester audiences in past Elysium productions. Both Alice and Danny starred in Jesus Hopped the A Train last year at HOME; and in the company’s 2017 production of Jez Butterworth’s Days of Wine and Roses at 53two for which Danny was nominated for a Manchester Fringe Award. Playing alongside them in the role of Christine, is actor Lois Mackie. Joining them on stage in this production – as a servant ensemble – will be local drama students from the ALRA North and other North West based schools.

Multi-award winning director Jake Murray is also no stranger to Manchester, having spent seven years at the Royal Exchange Theatre, progressing from Michael Elliott Foundation Bursary Trainee Director to Associate Artistic Director before leaving to go freelance. He was co-artistic director with Sarah Frankcom of the Exchange Studio, during which time the space was nominated for a Peter Brook Empty Space Award. Days Of Wine And Roses. His production of Jesus Hopped The ‘A’ Train at HOME last year, achieved great critical acclaim.

He has worked all over the UK as a freelance director, and set up Elysium Theatre Company in 2016.

Elysium is dedicated to bringing the best new plays and world theatre to the North. Founded by Jake, Danny and actress/ producer Hannah Ellis Ryan, the company is currently Company In Residence at the Assembly Rooms, Durham.

Levenshulme Market is holding a Kindness Night this Friday