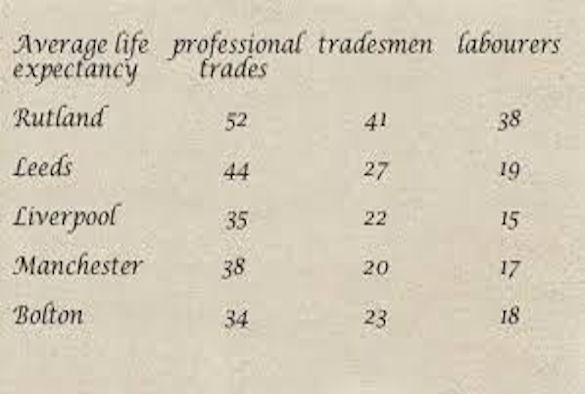 Research led by the University of Liverpool has revisited a study carried out 175 years ago by a Manchester born reformer which compared the health and life expectancy of people in different parts of the country, to see if its findings still held true.

They found that stark differences still exist and that people living in Liverpool still had lower life expectancy than those living in the rural area of Rutland.

The original study into sanitation conditions by Edwin Chadwick in 1842 charted the average age by death and by occupational group for five areas in the UK – Liverpool, Leeds, Manchester Bolton and Rutland, a rural county in Eastern England.

The findings revealed a strong correlation between where you lived, what your job was and the age you lived to.  This was the first study to demonstrate the huge geographical differences in health and life circumstances. It showed that a labourer in Rutland could expect to live a longer life than a professional tradesman in Liverpool.

Research led by the University’s Department of Geography & Planning undertook a similar analysis using data from the Office of National Statistics and the 2011 census. to see if the same pattern still persisted.

They found that whilst the level of inequality wasn’t anywhere near as big as it had been between the two areas in 1842, individuals in the middle social class bracket in Rutland still lived longer than those in the highest social class in Liverpool.

Dr Mark Green, who conducted the study, said: “On the 175th anniversary of this report, which was ground-breaking at the time, we wanted to see if in the 21st century your geography – that is where you live – still determined your health and life expectancy.

“We found that whilst life expectancy has nearly doubled since Chadwick’s report, there is still a link between where you live, your social class and how long you live. There seems to be something about Liverpool that impacts on health beyond an individual’s social circumstances with those further down the social ladder having a disproportionate share of ill health and premature mortality.

“It is remarkable that after 175 years, mortality rates in Liverpool are still higher than in Rutland within each occupational group. What this demonstrates is that living in certain locations offers very different life chances and health outcomes for people within the same occupational groups.”