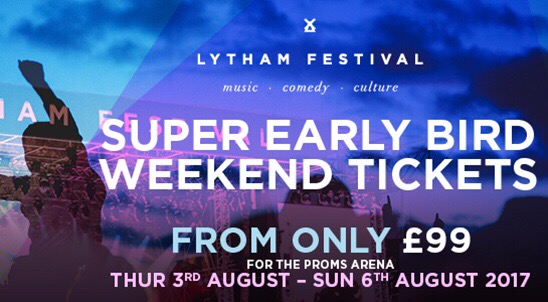 Weekend tickets for Lytham Festival 2017 will go on sale this week at just £99.
A limited number of Super Early Bird 2017 tickets giving customers general admission to four nights in the Main Proms Arena (Thurs 3 – Sunday 6 August) will go on sale at 8am on Friday.

The announcement comes just a week after Lytham Festival enjoyed its largest and most successful event to date.

Headliners Noel Gallagher’s High Flying Birds and Bryan Adams wowed crowds of almost 30,000 people over two nights in the Main Proms Arena. While around 40,000 people enjoyed a further three nights of live entertainment on Lytham Green and a week of music, comedy and film at six satellite venues throughout the Lancashire town.

Lytham Festival director Peter Taylor said: “We are delighted to be releasing this wave of super value £99 weekend tickets so early. Ordinarily we issue these tickets much later but the support for Lytham Festival 2016 has been absolutely amazing and therefore we want to give people the opportunity to grab these tickets as early as possible.
“This early release of tickets also gives hoteliers and accommodation providers the opportunity to secure bookings well in advance of the event.”

Once the £99 tickets have gone, Lytham Festival will then release further weekend tickets costing £109, £119 and £139. Child tickets (aged 6-15 years) for just £49.50 will be available with all offers, while there will also be a limited number of free tickets for youngsters aged 5 and below. In addition, Lytham Festival is offering a 10-month payment plan so customers can spread their payments.

Peter added: “Lytham Festival is growing every year and we want to ensure we make the event as accessible as possible to everyone.

“Our super value tickets do just that and by introducing a 10-month payment plan this year we are confident that those people who wouldn’t necessarily have the funds available right now to buy their tickets, can do so safe in the knowledge that it is much more affordable for them.

“Lytham Festival 2016 really was a resounding success. Of course we were forced to end the Star Wars and West End Proms nights early due to bad weather but the positive feedback we’ve had from customers has been absolutely fantastic.

“Plans are well underway for Lytham Festival 2017 and we look forward to announcing details of our amazing line-up as soon as possible.”

The Bee Hive Novel debut book of local writer designed and illustrated by 13...