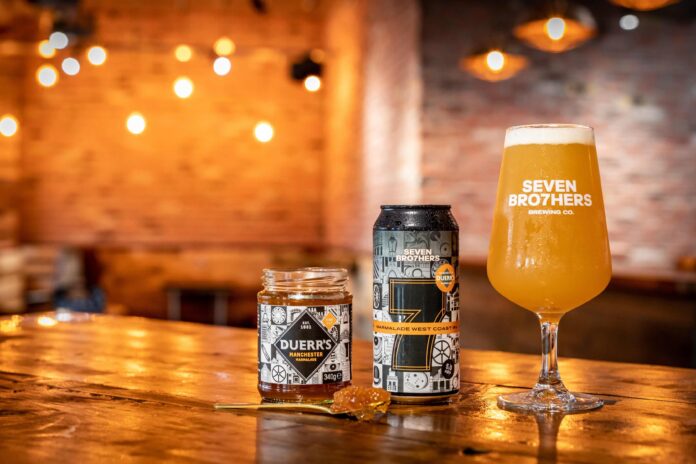 British Marmalade manufacturer Duerr’s is celebrating its 140th anniversary by transforming its most-loved Manchester Marmalade into a beer.

The Manchester-based business has teamed up with Salford Brewery SEVEN BRO7HERS
BREWING CO to create its first Marmalade beer. Duerr’s has been perfecting the art of
preserving since 1881 and is marking 140 years in business this year with the launch of a
limited-edition Manchester Marmalade beer as a celebration of the city.

Richard Duerr, marketing and sales director at Duerr’s, said, “Our business has reached a huge milestone and what better way to celebrate than with a beer or two!

We’re hugely proud to have teamed with a fellow Manchester born and bred business that shares our family values and a love of Manchester – two things that have been integral to our business over the past 140 years.

It’s been a pleasure to work with the SEVEN BRO7HERS team to develop this beer, taking what we are well known for, the best of breakfast, and transforming the flavours into something completely new that we hope people will enjoy as much as we do. Cheers!”

The beer contains specially selected hops and malted barley, carefully combined with tangy,
tasty tantalising Duerr’s Manchester marmalade which has resulted in a bright hoppy beer
that’s classically bitter with a piney, resinous and citrus aroma. At 5% ABV, the subtly sweet beer boasts an orange hue – the perfect autumnal tipple to enjoy as the nights draw in.

Keith McAvoy, CEO at SEVEN BRO7HERS BREWING CO, which celebrated seven years in
business in 2021, added, “We are delighted to team up with the Duerr’s family to mark their incredible 140th anniversary. We love collaborating with local, family businesses, so working with one of the city’s most historic brands feels like the perfect Manchester fit.

Duerr’s Manchester Marmalade is iconic and a firm favourite in our household. We hope
this beer captures the spirt of home and the comfort you get from having something as
simple as marmalade on toast. Of course, we have added a little Salford family cheekiness
to this beer (it is our seventh birthday after all) bringing you a deliciously tangy and fruity
beer perfect for any time of day!”

Duerr’s is England’s oldest family-owned jam maker and has been producing high-quality
and innovative jams, marmalades, sweet spreads and condiments in Manchester since
1881.

From Fred and Mary Duerr’s homegrown business, the family has continued to expand the company through a unique blend of traditional techniques and ground-breaking
innovation. Brother’s Mark and Richard Duerr are now at the helm of the business as it
continues to feed the nation.

SEVEN BRO7HERS BREWING CO was founded in 2014 by McAvoy brothers, Guy, Keith,
Luke, Daniel, Nathan, Kit, and Greg, inspired by their dad’s home-brewing in their cellar at
home.

Celebrate this season of love at Shoryu Ramen

Lighting up Albert Square for Diwali