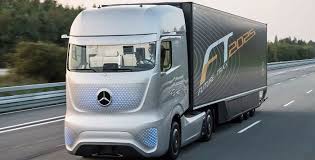 Fleets of driverless lorries will be plying their trade on Britain’s Motorways from next year, the government has announced this morning.

The ‘platooning’ trials will see up to threw heavy goods vehicles, travelling in convoy, with acceleration and braking controlled by the lead vehicle.

All lorries in the platoon will always have a driver ready to take control at any time.

If successful, this technology could have major benefits for motorists and businesses in the UK.

A row of lorries driving closer together could see the front truck pushing the air out of the way, making the vehicles in the convoy more efficient, lowering emissions and improving air quality says the government as they announced £8.1m in funding for the trial.

The Transport Research Laboratory will carry out the trial, with funding provided by the Department for Transport and Highways England.

It follows a government-funded feasibility study which recommended a trial to examine the benefits and viability of the so called platooning.

“We are investing in technology that will improve people’s lives.Advances such as lorry platooning could benefit businesses through cheaper fuel bills and other road users thanks to lower emissions and less congestion.”

“But first we must make sure the technology is safe and works well on our roads, and that’s why we are investing in these trials.”

Universal Credit expansion is ‘a disaster waiting to happen’