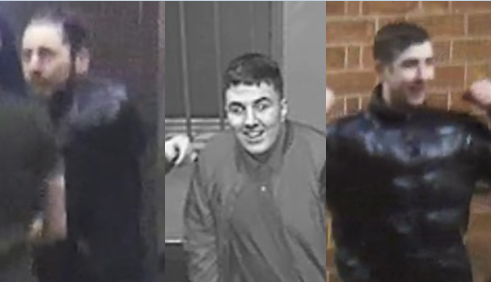 Police investigating two assaults in Rochdale two weekends ago have released CCTV of three men they want to speak to after two men had been assaulted on Packer Street in the town centre, near Ko-Ko Kobana Lounge in the hours of Saturday 8th Feb.

The two, both in their 20s, wee left with head injuries.Both men were taken to hospital and have since been discharged.

The two assaults occurred in the same area at around the same time but are not thought to be connected to each other.An investigation is underway.No arrests have been made.

Detective Sergeant Andrew Dixon, of GMP’s Rochdale division, said: “These nasty assaults could easily have resulted in even more serious consequences so, despite them happening a few weeks ago, our enquiries are very much ongoing.

“We don’t believe they are linked but, due to them happening at the end of a night out, it is likely there were people in the area at the time who can assist us with both sets of enquiries.

“If you recognise the men in the CCTV or have any other information then please get in touch with us.”