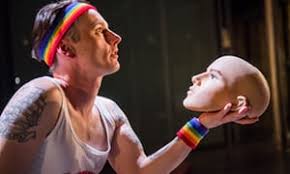 When award-winning lip synch maestro and intrepid drag fabulist, Dickie Beau, realised that he might never play The Dane, he decided instead to turn himself into a human Hamlet mix-tape.

He would channel audio recordings of great historical performances of theatre’s most famous role, including Sir Ian McKellan and Sir Richard Eyre, to “re-member” the ghosts of Hamlet from the past.

Along the way, he stumbled upon the story of one especially masterful Hamlet; one that left an indelible mark on all who saw it. But it is a Hamlet that cannot be “re-membered” because no recording exists, except in the memories of those who were there. Humorous and haunting, Re-Member Me is part documentary theatre, part 21st-century séance, and the unforgettable story behind the greatest Hamlet almost never seen.

Sir Ian McKellan said of the show: This is one of the most moving, authentic and quite unique entertainments ever devised about theatre. One man, miming to the voices of many others, raises lip-synching beyond an art form. I laughed and I cried – but then I am one of the voices.

A pioneer of playback performance, emerging from the drag tradition of lip-synching, Dickie Beau influences the practice of a whole new generation of performance-makers. His work began to take shape on the alternative drag scene in London’s East End, and is informed by a history that includes classical acting.

Dickie Beau defies conventional ideas of what drag performance is and can be, whilst bringing about innovative new theatre experiences, and his process of writing “digital scripts” opens up fresh approaches to writing for performance.

What’s On at Corn Exchange This Summer