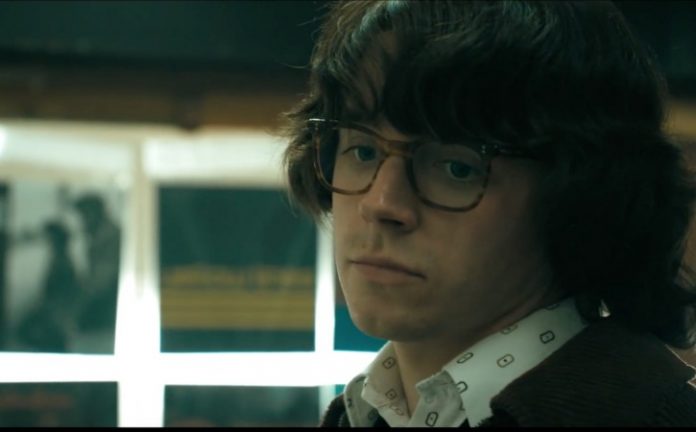 England Is Mine, Mark Gill’s feature length directorial debut, explores the life of Steven Patrick Morrissey – that is, before he became known to the world as simply Morrissey. Perhaps inspired by the lyrics from The Smith’s ‘Still Ill’ which read ‘England is mine, it owes me a living’, the music drama exposes the young and extremely dissatisfied Morrissey before his fame and career kicked off in Stetford and parts of Greater Manchester in the late 70s and early 80s.

The absence of The Smiths’ musical output is probably the most surprising and subsequently frustrating aspects of the film. With Steven’s perpetually bad mood, sharp cynicism and complete denial to try anything out of his small comfort zone, the biopic’s musical absence makes its hard to see why this young man was so special to begin with. But with no involvement on behalf of Morrissey, Mark Gill’s production is almost certainly tip toeing around the fact that the film is unauthorised and so thus is void of legal rights to include even a whisper of the songs we’ve grown to know and love.

For this reason, the film ends where it feels like the story begins. The final scene sees Steven take the plunge to meet with Johnny Marr at his home. After we hear the knocking of the door and Johnny turning the bolt to open, the film abruptly ends. It is here where we can only assume Steven and Johnny formed a band we would later know as The Smiths. As an audience, it is this point where you want the film to start, or at least keep going.

Whilst the choice of chronology of the film may leave audiences disheartened, it is the performance of Morrissey himself that makes up for it. For avid fans, his restless malcontent, cynical reflections and ability to alienate nearly all he encounters meets expectation of his notorious character. For those not well acquainted with Morrisey’s history of awkward and abrupt encounters, his portrayal may seem disappointingly bland. Whether it is his complete lack of respect for his coworkers and boss at the Tax Office or the random strangers he meets at a party, England is Mine doesn’t paint Morrissey to be the classic charming and charismatic hero. Instead, he is troubled, introverted and at a loss in a world where his narcissism deems everyone as intellectually and musically inferior.

Mark Gill’s production does, however, show an insight into the upbringing of the global star that may be commonly unknown. Coming from a working class Irish family in Manchester, Steven’s home life is troubled by the jarring relationship between him and his father, presumably aggravated by the demise of his parent’s already failing marriage. With continual nags from his father telling Steven to find a job, it is his dissatisfying work life in the Tax office and the continual encouragement from his friends that lead Steven to eventually meets Billy Duffy. From there, he fronts The Nosebleeds and faces his overwhelming nerves and shyness. It is here, and only here, where we hear Morrissey, played by Dunkirk actor Jack Lowden, sing.

Lowden’s performance as Morrissey at his first gig felt surprisingly authentic. His unusual baritone voice was achieved and his usual awkward off stage demeanour forgotten about. As the film suggests, it is the stage where Morrissey felt he truly belonged compared to the outside world where he failed to fit in.

Billy’s success (and his later involvement in The Cult) at the cost of Steven’s failure is the trigger that causes the spiral of depression that leaves Steven motionless and emotionless on screen. England is Mine effectively gives an insight into an otherwise visually unexplored world of dark, upsetting, and unheard thoughts. Whilst The Smith’s musical repertoire definitely explores the unhappiness of its frontman, it is England is Mine that tries to delve deep into a young Morrissey and hints to future inspirations for musical expression of misery and despondency. His book on the Moors Murders that lies on his bedroom desk is just one example that fans may link to the creation of the song ‘Suffer Little Children’.

Whilst the film may not be the must-see film of the summer, it will definitely appeal for those wishing to get a feel of the young, unseen Morrissey – sharp wit, talent, aspirations and late 70’s aesthetics included. With the news of Morrisey’s latest album ‘Low in High School’, the film comes at a time when the world is not quite ready to forget Morrissey just yet.