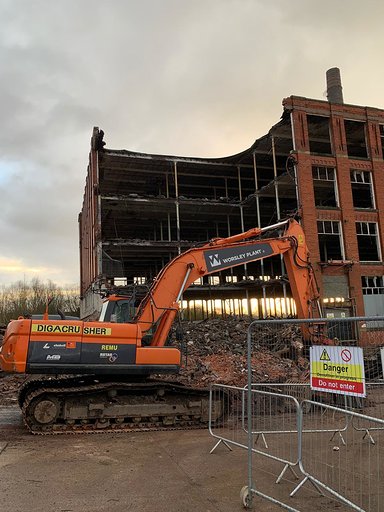 Works to demolish Hartford Mill have begun marking the start of a major regeneration and housing project in Werneth.

Contractors are now on site at the derelict mill which will see the owner knock down the entire building.

Demolition will take approximately six months and as much material as possible will be reclaimed.

Oldham Council will work with the owners to ensure disruption is kept to a minimum.

Cllr Sean Fielding, Leader of Oldham Council, said: “This is an important milestone in this long-running project.

“Hartford Mill is a landmark but it had become a death trap and was causing issues in the neighbourhood with anti-social behaviour and arson attacks occurring regularly.

“This site will provide much-needed new housing for the future. The council does everything it can to support building on brownfield land, to reduce pressure to build on the greenbelt. This site is a great example of that.”

In January 2019, Oldham Council’s planning committee approved proposals to demolish the building, which is privately owned.

The decision was referred to the Secretary of State as it involved the complete demolition of a listed building. Permission was subsequently granted because redevelopment would outweigh the loss of the listed building due to its poor state of repair and continuing blight on the local area.

Built in 1907, Hartford Mill ceased cotton spinning in the 1950s and was then later used by Littlewoods until 1991. It has remained vacant since and despite being marketed for a range of potential future uses over the last three decades, the owner was unable to secure a scheme for its re-use.

Salford Quays unveils its vision for 2030