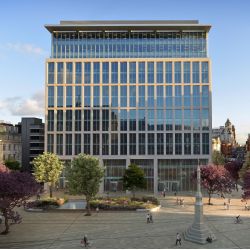 The landmark development in the centre of Manchester has been sold for £164m by Argent and The Greater Manchester Property Venture Fund.

The thirteen storey building was completed in September 2014 and its current tenants include KPMG, DLA Piper, Addleshaw Goddard and Mazars, along with Drake & Morgan and Fumo in the retail units.

John Heaver, investment director at Savills, comments: “The characteristics of One St Peter’s Square make it a rare and prestigious product that will compliment Deka’s portfolio and we are encouraged by their continued commitment to the UK.”

Councillor Kieran Quinn, chair of Greater Manchester Pension Fund (GMPF) adds: “The sale of One St Peter’s Square to Deka Immobilien brings to a conclusion the involvement of the Greater Manchester Pension Fund in the redevelopment of the site. GMPF originally purchased the old Elizabeth House in 2003, prior to the formation of the joint venture with Argent in 2008. The faith and confidence in the development by both partners has achieved the twin aims of GMPF’s local investment strategy. The Fund has made the returns required to deliver the pensions promised to its members, and delivered a landmark building for Manchester city centre. This building which, when commenced, was the only new construction in the city centre, has acted as a catalyst for the development of St Petersfield with the new tram site and significant improvement to the public realm.”

David Partridge on behalf of Argent and Hermes/BTPS, says: “The design and quality of this office building and the Manchester City Council supported public realm around it, along with the significant works to the Town Hall Extension and the Library, have been a vital ingredient in re-establishing St Peter’s Square as the pre-eminent civic space in Manchester, and that is why we have attracted such an impressive line-up of occupiers.  The public facing ground floor along with the Fumo and Drake and Morgan restaurants have already made One St Peter’s Square a destination in its own right.”

All systems go for Rochdale’s Riverside