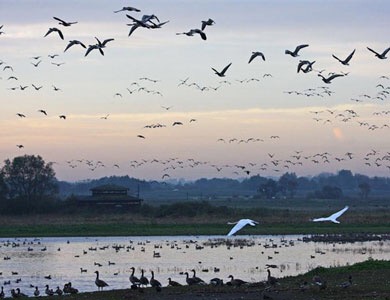 WWT Martin Mere Wetland Centre is hosting four dawn flight events in September and October as thousands of Pink-footed geese undertake their migration from Iceland, stopping at WWT Martin Mere on their way to create an autumn wildlife spectacle.
The events, on Saturday 26 September, 3, 10 and 17 October, begin at 7am with an early morning walk to see the spectacle of thousands of geese leave the roost, before enjoying a full English breakfast in Mere Side Cafe.
Centre Manager, Nick Brooks, said: “This event is a fantastic opportunity to get some magical photographs as geese fill the sky at dawn. The noise is often deafening and it is one of nature’s greatest sights; only available to watch for up to three weeks before they continue on the migration.”
In addition, for the first time WWT Martin Mere are also offering visitors the chance to stay on the nature trail until 7pm to watch up to 40,000 geese come into roost every Wednesday and Saturday throughout October. This experience is part of normal opening hours and normal admission applies.
WWT Martin Mere welcomes thousands of migratory birds to its 650 acre nature reserve every year. The pink-footed geese will travel from Iceland to spend the winter in southern Britain, and they use WWT Martin Mere almost as a service station to rest and re-fuel for up to three weeks before continuing on their journey.