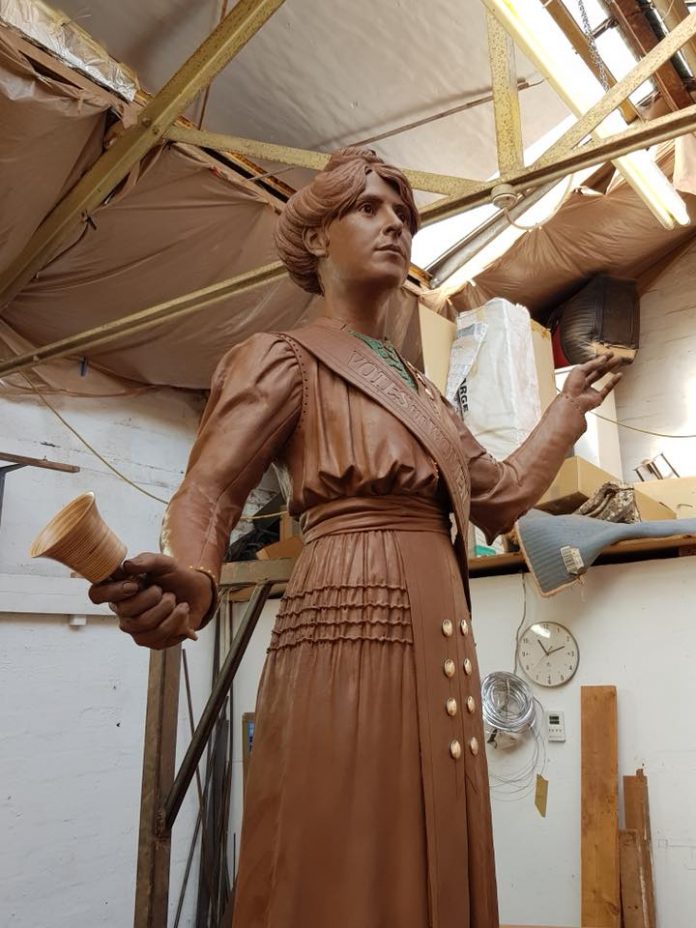 Two years of hard work and fundraising will come together on Friday 14th December at 2.15pm, when a statue of local-born suffragette Annie Kenney is unveiled outside the Old Town Hall in Oldham.

The statue commemorates Annie’s role in extending the rights of women in Britain.
The date of the unveiling is significant.

It was on the 14th December 1918 that women in Britain first exercised their vote.

The unveiling is being organised by the Director of Oldham Theatre Workshop in conjunction with Oldham’s Town Centre Management team.

A march has been organised to Parliament Square which will be headed by a brass band and will be represented by everyone from Oldham including trade unions, local businesses, local schools, community organisations, and of course local residents.

The unveiling is at 2.15pm which may help people who want to attend the Pankhurst event in Manchester.
Artist, Stan Chow, and Maxine Peake and Amy Gavin, actors who have portrayed Annie in the past, have agreed to attend along with members of Annie’s extended family.

Children from St Thomas’ School, Lees have been invited to unveil the statue due to the work they have done telling Annie’s story throughout the year.

The unveiling also marks 100 years since some women were first given the vote in Britain, an issue that Annie dedicated her life in campaigning towards. So Oldham will be playing its part in a country-wide celebration of that anniversary.

“Annie’s unveiling marks the apex of two years of hard work, dedication and positivity from local residents and organisers. It goes to show what we can achieve for Oldham when we work together, which is why we want as many local residents as possible to head down to the Old Town Hall on the day.
“The unveiling will be a big day in itself. But the most inspiring thing for me is the thought of Annie’s presence once again in the Town Centre, telling her story and inspiring future generations.”