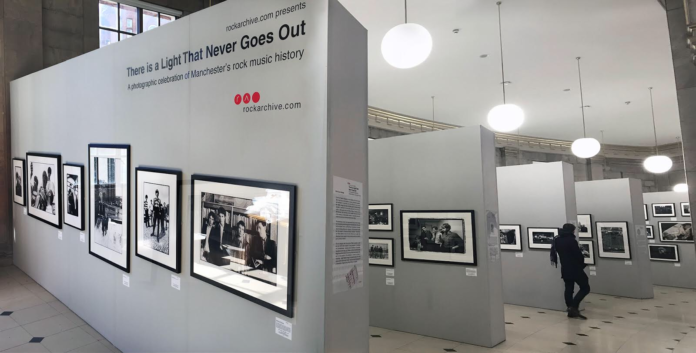 The University of Manchester and Rockarchive.com will launch a joint crowdfunding campaign to keep an acclaimed exhibition celebrating Manchester’s rock music history on permanent display in the city this evening,

The campaign follows The ‘There is a Light That Never Goes Out’ photography exhibition, first displayed at Manchester Central Library in October 2018.

It was a collection of over 80 photographs of bands and musicians from Manchester’s glorious rise to prominence in the 70’s, 80s, 90s, through to the present day. During its four month showing it attracted over 38,000 visitors and huge public acclaim.

This campaign will raise funds to secure the exhibition a permanent home at the University so it can continue to inspire current and future generations to keep the flame of Manchester’s vibrant music scene burning.

Many of the iconic images were taken from a pool of the UK’s most talented music photographers, including legendary Manchester based lensman, Kevin Cummins, Paul Slattery, Pennie Smith and Rockarchive founder Jill Furmanovsky.

In addition a number of photographers have contributed more contemporary images of the Manchester scene, giving an overall picture of Manchester’s music heritage from the mid-1970’s right up to the present day.

The campaogn is being led by two of those photographers Paul Slattery and Jill Furmanovsky.

35 years in prison for the gang who kidnapped a man and subjected him...