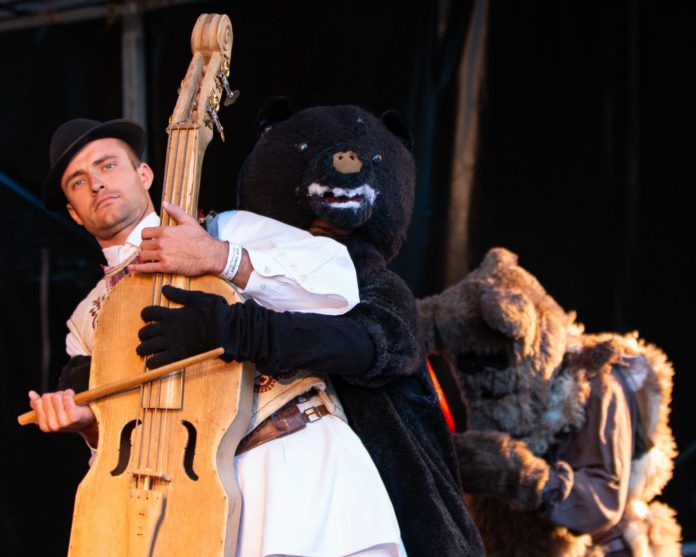 This May sees the return of the UK’s only free weekend festival to celebrate in riotous colour the arts, culture, food and drink of the fabled-region of Transylvania.

Last year’s event in Manchester’s central Albert Square, saw 17,000 adventurous revellers put their best foot forward to try out traditional folk dancing and soak up the sounds of a Celtic Transylvanian punk band, shake hands with one of Hungary’s biggest pop stars and sample delicacies including the spit-roasted sweet treat chimney cake and lángos (fried dough served with various toppings such as crème frèche and garlic).

The Maros Ensemble, from Széklerland in Transylvania, celebrated their 60th anniversary in 2016 and promise to showcase “traditional dances from East-Transylvanian villages inhabited by Romanians, Hungarians, Germans and Gypsies”.

Whilst Bohemain Betyars are bring their self-described “speed-folk freak-punk” with Hungarian, Balkanic and Gipsy elements to the UK for the first time.

Góbéfest was established in 2017 to celebrate the little-known culture and traditions of the Székler people – a minority group of ethnic Hungarians living in Transylvania, which is part of Romania.

A Góbé is a friendly word for a ‘crafty Székely’.

Event organiser Ottilia Ördög is herself a Székely Hungarian, now settled in UK for almost 30 years and working as a cultural leader. She said: “Góbéfest brings the magical sounds, sights and smells of one of Europe’s most mythologised and unspoilt regions to the centre of Manchester.

“The weekend will serve up a family friendly and unashamedly enthusiastic mix of music, dance, arts and crafts and food and drink, offering just a glimpse of the true flavours of Transylvania and the Carpathian Basin.“

Outside theatre at Salford’s Ordsall Hall