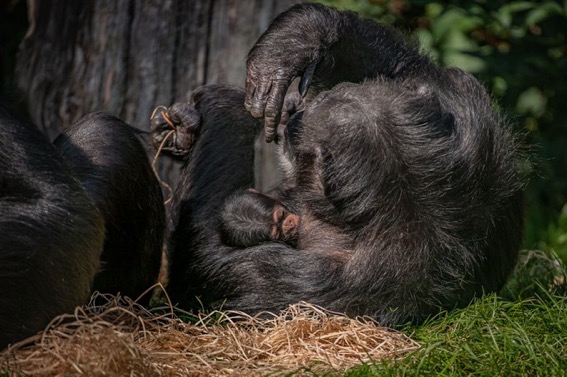 A critically endangered Western chimpanzee has been born at Chester Zoo.

Primate experts at the zoo are yet to determine the sex of the new arrival but have declared the birth as a ‘hugely significant’ for the species.
New estimates suggest that as few as 18,000 Western chimpanzees remain in Africa and it’s the first subspecies of chimpanzee to be added to the list of critically endangered apes.

“Mandy is a wonderful mum. She’s bonded instantly with her new baby and can be seen protectively cradling it in her left arm at all times.

It’s a little too soon to tell if her new arrival is male or female as a newborn chimpanzee will remain in the arms of mum for several months until they develop the confidence to start exploring independently. Most importantly though, it’s bright eyed, alert and getting stronger by the day.

A new arrival always creates a lot of excitement – it’s a real extended-family affair as many of the females in the group often want to help to take care of the newcomer while, for some of the juvenilles, seeing a mum with a new baby is a completely new experience. It’s great to see the other youngsters watching Mandy closely and learning from such a natural mother.”

The Western chimpanzee is found in West Africa – ranging from Senegal to Ghana – but is already believed to be extinct in Benin, Burkina Faso and Togo.

Chester Zoo is actively involved in the conservation of some of the world’s rarest chimpanzees in Africa, including its vital 20-year-long support for the last stronghold of another species, the Nigeria-Cameroon chimpanzee, in Gashaka Gumti National park in Nigeria.

Getting cooking down in Cheadle Hulme