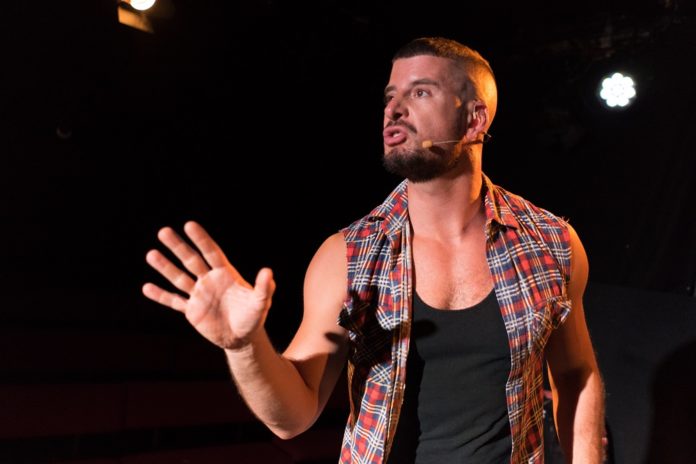 A powerful verbatim theatre piece exploring the history of the LGBTQ rights movement visits Oldham as part of a Pride Season UK tour this July.

Riot Act will be performed at Oldham Coliseum’s Studio Theatre on Saturday 27 July at 2.30pm, coinciding with Oldham Pride 2019.

Written and performed by Alexis Gregory, Riot Act is a hard-hitting, hilarious and heart-warming solo verbatim piece, taking audiences on a breath-taking journey through six decades of queer history.

Created from the playwright’s interviews with Michael-Anthony Nozzi, one of the only remaining Stonewall survivors; Lavinia Co-op, a 1970s London radical-drag artist; and Paul Burston, a prominent 1990s AIDS activist.

It promises to be a riot!

This new tour follows a sold-out West End performance and a summer 2018 run in the Kings Head Queer Season. The tour will also visit Old Joint Stock Theatre, Birmingham; Arcola Theatre, London; Crewe Lyceum; Norwich Theatre Royal; Wardrobe Theatre in Bristol; and The Marlborough in Brighton. The performance at Arcola Theatre on 30 June will mark the 50th anniversary weekend of the Stonewall riots.

Producer Rob Ward said: “With recent developments in Brunei as well as protests outside primary schools in Birmingham, ‘Riot Act’ provides a timely reminder just how precious these rights are and how passionately they must be defended. We are incredibly proud to present ‘Riot Act’ to audiences across the UK this Pride season.”

Riot Act is recommended for audiences of 16 years+. Contains themes and language of an adult nature.

The ‘Riot Act’ play text is published by Oberon Books